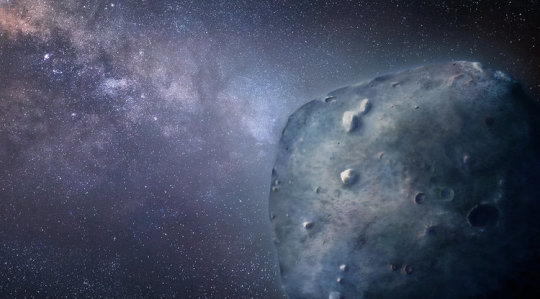 Blue asteroids are rare, and blue comets are almost unheard of. An international team led by Teddy Kareta, a doctoral student at the University of Arizona’s Lunar and Planetary Laboratory, investigated (3200) Phaethon, a bizarre asteroid that sometimes behaves like a comet, and found it even more enigmatic than previously thought.

Kareta presented the results during a press conference on Oct. 23 at the 50th annual meeting of the American Astronomical Society’s Division for Planetary Science in Knoxville, Tennessee.

Using telescopes in Hawaii and Arizona, the team studied sunlight reflected off Phaethon, which is known to be blue in color. Blue asteroids, which reflect more light in the blue part of the spectrum, make up only a fraction of all known asteroids. A majority of asteroids are dull grey to red, depending on the type of material on their surface.

Phaethon sets itself apart for two reasons: it appears to be one of the “bluest” of similarly colored asteroids or comets in the solar system; and its orbit takes it so close to the sun that its surface heats up to about 800 degrees Celsius (1,500 degrees Fahrenheit), hot enough to melt aluminum.

Astronomers have been intrigued by Phaethon for other reasons, too. It has the qualities of both an asteroid and a comet based on its appearance and behavior.

Phaethon always appears as a dot in the sky, like thousands of other asteroids, and not as a fuzzy blob with a tail, like a comet. But Phaethon is the source of the annual Geminid meteor shower, easily seen in early-to-mid December.

Until Phaeton was discovered in 1983, scientists linked all known meteor showers to active comets and not asteroids.

“At the time, the assumption was that Phaethon probably was a dead, burnt-out comet,” Kareta said, “but comets are typically red in color, and not blue. So, even though Phaeton’s highly eccentric orbit should scream ‘dead comet,’ it’s hard to say whether Phaethon is more like an asteroid or more like a dead comet.”

Phaethon also releases a tiny dust tail when it gets closest to the sun in a process that is thought to be similar to a dry riverbed cracking in the afternoon heat. This kind of activity has only been seen on two objects in the entire solar system — Phaeton and one other, similar object that appears to blur the line traditionally thought to set comets and asteroids apart.

The team obtained several new insights about Phaethon after analyzing data obtained from NASA’s Infrared Telescope Facility on Mauna Kea in Hawaii and the Tillinghast telescope, operated by the Smithsonian Astrophysical Observatory on Mount Hopkins in Arizona. They think Phaethon might be related or have broken off from (2) Pallas, a large blue asteroid farther out in the solar system.

“Interestingly, we found Phaethon to be even darker than had been previously observed, about half as reflective as Pallas,” Kareta said. “This makes it more difficult to say how Phaethon and Pallas are related.”

The team also observed that Phaethon’s blue color is the same on all parts of its surface, which indicates it has been cooked evenly by the Sun in the recent past.

The team is now conducting observations of 2005 UD, another small blue asteroid astronomers think is related to Phaethon, to see if they share the same rare properties. This and follow-up work will help to untangle the mystery of what Phaethon is really like.

Materials provided by University of Arizona. Original written by Teddy Kareta. Note: Content may be edited for style and length.