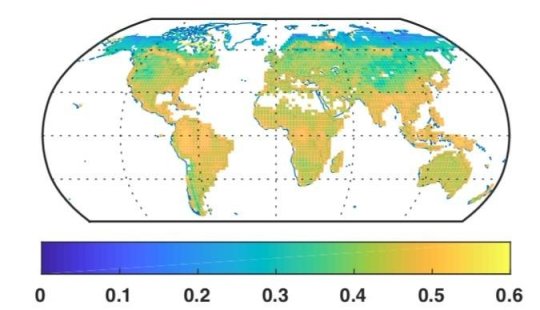 Climate scientists have not been properly accounting for what plants do at night, and that, it turns out, is a mistake. A new study from the Department of Energy’s Lawrence Berkeley National Laboratory (Berkeley Lab) has found that plant nutrient uptake in the absence of photosynthesis affects greenhouse gas emissions to the atmosphere.

“This is goodish news, with respect to what is currently in the climate models,” said Riley, a scientist in Berkeley Lab’s Earth & Environmental Sciences Area. “But it’s not good news in general — it’s not going to solve the problem. No matter what, plants will not keep up with anthropogenic carbon dioxide emissions; it’s just that they might do better than current models suggest.”

Humans have emitted a record-setting 34 gigatons of CO2 per year, averaged over the past decade. Roughly half of that remains in the atmosphere, while the rest is absorbed by oceans and land (through photosynthesis); the latter amount, called the terrestrial carbon sink, varies year to year depending on factors such as fires, drought, land use, and weather.

Scientists are trying to understand how increasing global carbon dioxide emissions will affect the terrestrial carbon sink, which is estimated to currently be between 0 and 11 gigatons of CO2 per year, including land-use change, with large inter-annual variability. A further complication involves terrestrial nitrous oxide, which is a powerful greenhouse gas naturally released from land and by agricultural and industrial activities. In other words, to what extent will plants be able to ameliorate increases in anthropogenic carbon dioxide emissions?

The new Berkeley Lab study found that by not properly accounting for what plants do at night and during the non-growing season, climate models may be underestimating the terrestrial carbon sink and overestimating nitrous oxide release, the latter by 2.4 gigatons of CO2-equivalent per year. “This number is substantial compared to the current terrestrial carbon sink,” Riley said, anywhere from roughly one-quarter to more than 100 percent, depending on the year.

Plants’ ability to take in carbon dioxide is limited by the availability of soil nutrients, especially nitrogen and phosphorus. The more abundant nutrients are, the more plants can take advantage of increasing atmospheric carbon dioxide. Microbes in the soil are a factor too because they compete with plants for nutrients.

Microbes, in fact, play an important role in the carbon cycle, and interactions between plants, soil, and microbes are complex, presenting a challenge to climate scientists. Most climate models assume that plants compete for nutrients in the soil only when they’re demanding it for photosynthesis, and not, for example, at night or in non-growing seasons.

“What most climate models have ignored is this pretty robust observational literature showing plants acquire nitrogen from soil even when they’re not photosynthesizing,” Riley said.

Berkeley Lab has been focused on the topic of plant-soil-microbe interactions through its Microbes to Biomes initiative, and it will be a core theme of the Biological and Environmental Program Integration Center, or BioEPIC, a proposed facility that would house one-of-a-kind experimental capabilities to advance DOE’s mission objectives in energy and environmental science. One aim is to represent and study these processes at scale and in a controlled way.

“This study demonstrates progress in more mechanistically representing the terrestrial processes that are important for climate and will be important for BioEPIC,” Riley said.

In this study, Berkeley Lab researcher Qing Zhu, a co-author of the paper, conducted a meta-analysis of 120 experiments of short-term nitrogen uptake by plants to test their new global land model, named ELMv1. “We also compared observations of nutrient uptake at nighttime versus daytime and across non-growing seasons,” Riley said. “We’re pretty confident that the basic mechanisms in the model are correct and this meta-analysis and individual site observations back that up.”

They found that a significant portion of nutrient uptake takes place in the absence of photosynthesis as plants and microbes compete for nutrients. “The amounts vary a lot by latitude, but in the higher latitudes, such as the Arctic, roughly 20 percent of plants’ annual nitrogen uptake occurs outside the growing season. That goes up to 55 percent for nighttime uptake in the tropics,” he said. “That’s a huge deal for plants and will facilitate atmospheric carbon uptake, and it’s currently completely ignored in most climate models.”