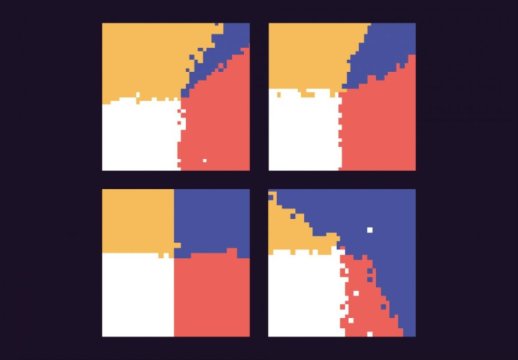 As a physical system undergoes a phase transition, it typically becomes more — or, less — ordered. For instance, when a piece of iron is heated to above the Curie temperature, the strong ferromagnetic alignment of the elementary magnetic dipole moments gives way to much weaker paramagnetic alignment. Such changes are well described in the general framework of order parameters, provided by the Landau theory of phase transitions. However, many materials of current fundamental and technological interest are characterised by more than one order parameter. And here the situation can become extraordinarily complex rather quickly, in particular when the different orders interact with one another. The traditional route to gaining an understanding of such complex quantum systems is, simply speaking, to carefully explore the response to changes in external conditions and to various probes, and thus to map out the phase diagram of the system.

A complementary approach is now presented by Tobias Donner and his team in the group of Tilman Esslinger in the Department of Physics of ETH Zurich. They control all relevant microscopic parameters of a quantum system governed by two coupled order parameters and therefore can essentially construct, and modify, the phase diagram from bottom up, as they report in a paper published today in the journal Nature Materials.

Phenomenological models that reproduce the experimentally determined phase diagrams of materials with one or more ordering tendencies have provided deep insight into the behaviour of a variety of systems, such as multiferroics — where a material exhibits simultaneously ferromagnetism and ferroelectrism, opening the door to new functionality — or certain families of superconductors. However, the microscopic processes underlying the formation of macroscopic order in these systems remain often unknown. This gap in understanding limits the predictive power of phenomenological models and at the same time makes it difficult to know just how a given material should be modified to obtain desired properties. Hence the appeal of the approach taken by Donner and his colleagues, who started not with a specific system and its phenomenological description, but with a flexible quantum system whose relevant microscopic parameters can be controlled with high accuracy, and be tuned across a broad range of values, enabling the realization of diverse scenarios.

To create such a versatile platform, the team optically trapped a Bose-Einstein condensate (BEC) at the intersection of two optical cavity modes (see the figure). In this configuration, the BEC can crystallise in two different patterns, each of which is associated with a different order parameter. Depending on the experimental setting, the two orders either competed with one another — forcing the system into one of the two patterns (red and yellow) — or to coexists, leading to a new coupled phase (blue), where the two orders do not simply add, but give rise to a more complex spatial arrangement. The extent of this mixed-order phase can be controlled as well, to favour regimes of mutual exclusion or of mutual enhancement.

Whereas these particular phases have no known direct role in practical materials, the approach established with these experiments can be modified to simulate in the future properties of materials that are technologically highly relevant indeed. In particular, in cuprate high-temperature superconductors coupled spin and charge order are know to have an important, yet not fully understood role. The sort of experiments now pioneered by the ETH physicists should offer a unique tool to explore such phases — and various others — starting from a ‘clean’ quantum system with well-controlled and widely tunable interactions.