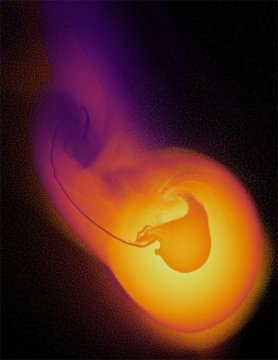 Uranus was hit by a massive object roughly twice the size of Earth that caused the planet to tilt and could explain its freezing temperatures, according to new research.

Astronomers at Durham University, UK, led an international team of experts to investigate how Uranus came to be tilted on its side and what consequences a giant impact would have had on the planet’s evolution.

The team ran the first high-resolution computer simulations of different massive collisions with the ice giant to try to work out how the planet evolved.

The research confirms a previous study which said that Uranus’ tilted position was caused by a collision with a massive object — most likely a young proto-planet made of rock and ice — during the formation of the solar system about 4 billion years ago.

The simulations also suggested that debris from the impactor could form a thin shell near the edge of the planet’s ice layer and trap the heat emanating from Uranus’ core. The trapping of this internal heat could in part help explain Uranus’ extremely cold temperature of the planet’s outer atmosphere (-216 degrees Celsius, -357 degrees Fahrenheit), the researchers said.

The findings are published in The Astrophysical Journal.

Lead author Jacob Kegerreis, PhD researcher in Durham University’s Institute for Computational Cosmology, said: “Uranus spins on its side, with its axis pointing almost at right angles to those of all the other planets in the solar system. This was almost certainly caused by a giant impact, but we know very little about how this actually happened and how else such a violent event affected the planet.

“We ran more than 50 different impact scenarios using a high-powered super computer to see if we could recreate the conditions that shaped the planet’s evolution.

“Our findings confirm that the most likely outcome was that the young Uranus was involved in a cataclysmic collision with an object twice the mass of Earth, if not larger, knocking it on to its side and setting in process the events that helped create the planet we see today.”

There has been a question mark over how Uranus managed to retain its atmosphere when a violent collision might have been expected to send it hurtling into space.

According to the simulations, this can most likely be explained by the impact object striking a grazing blow on the planet. The collision was strong enough to affect Uranus’ tilt, but the planet was able to retain the majority of its atmosphere.

The research could also help explain the formation of Uranus’ rings and moons, with the simulations suggesting the impact could jettison rock and ice into orbit around the planet. This rock and ice could have then clumped together to form the planet’s inner satellites and perhaps altered the rotation of any pre-existing moons already orbiting Uranus.

The simulations show that the impact could have created molten ice and lopsided lumps of rock inside the planet. This could help explain Uranus’ tilted and off-centre magnetic field.

Uranus is similar to the most common type of exoplanets — planets found outside of our solar system — and the researchers hope their findings will help explain how these planets evolved and understand more about their chemical composition.

Co-author Dr Luis Teodoro, of the BAER/NASA Ames Research Center, said: “All the evidence points to giant impacts being frequent during planet formation, and with this kind of research we are now gaining more insight into their effect on potentially habitable exoplanets.”

The research was funded by the Science and Technology Facilities Council, The Royal Society, NASA and Los Alamos National Laboratory.

Materials provided by Durham University. Note: Content may be edited for style and length.