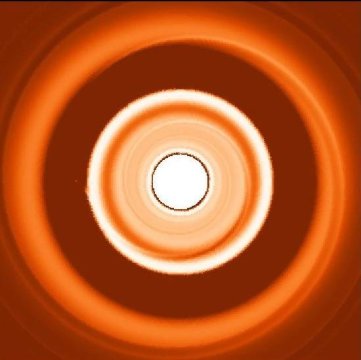 New research by a team led by an astrophysicist at the University of Warwick has a way of finally telling whether newly forming planets are migrating within the disc of dust and gas that typically surrounds stars or whether they are simply staying put in the same orbit around the star.

Finding real evidence that a planet is migrating (usually inwards) within such discs would help solve a number of problems that have emerged as astronomers are able to see more and more detail within protoplanetary discs. In particular it might provide a simple explanation for a range of strange patterns and disturbances that astronomers are beginning to identify within these discs.

Planet migration is a process that astronomers have known the theory about for 40 years but it’s only now that they have been able to find a way of observationally testing if it really occurs. This new research from a team led by the University of Warwick, along with Cambridge, provides two new observational signatures in young solar system’s dust rings that would be evidence of a migrating planet. That research will be published in the Monthly Notices of the Royal Astronomical Society.

The lead author, Dr Farzana Meru of the University of Warwick’s Astronomy and Astrophysics Group in the Department of Physics, on the paper said:

“Planet migration in protoplanetary discs plays an important role in the longer term evolution of planetary systems, yet we currently have no direct observational test to determine if a planet is migrating in its gaseous disc. However the technology now available to us in the Atacama Large Millimeter/submillimeter Array (ALMA), is able to look deep into these discs, and even see detailed structures within the discs such as rings, gaps, spiral arms, crescents and clumps. ALMA can also use different millimetre frequencies to seek out concentrations of different particle sizes so we can also use it to explore the make up of individual dust rings within the disc”

“Our latest research has found a way to use this new technology to spot what we think will be a clear signature within these dust rings that the planet closest to them is actually migrating within that very young solar system.”

The University of Warwick led research team have concluded that if ALMA looks at the two dust rings nearest the orbit of a planet a simple measurement of the typical particle size in each ring will reveal the answer.

If ALMA finds that the interior dust ring (i.e. between the planet’s orbit and the star) is typically made up of smaller sized particles, and that the exterior dust ring (immediately outside of the planet’s orbit) is typically made up of larger particles, then that will be clear evidence that the planet is migrating within the system’s protoplanetary disc. The size of the particles would differ for each disc but in a case where the planet is located 30 astronomical units from the star and is 30 times the mass of the Earth, the smaller particles in the inner ring would typically be less than a millimetre in size, whereas those in the outer ring would be a little over a millimetre.

ALMA will be able to observe this because the wavelength at which it observes roughly correlates with the dust particle size. This means that as observers look at the disc with ALMA at increasing wavelengths, the interior dust ring is expected to fade, while the exterior ring would become brighter.

The reason for this pattern is twofold. Firstly the researchers’ model shows that the exterior dust ring will contain more large dust particles because they move at a higher velocity (than the smaller particles) and are fast enough to keep up with the planet as it orbits inwards. This will result in a ring exterior to the planet’s orbit that is mostly made up of large particles.

Secondly, the inner ring consists of small particles because they move inwards more slowly than the planet. Consequently they are unable to get out of the way of the inwardly migrating planet and so accumulate in a ring just inwards of the planet. This time the fast-moving large dust moves rapidly towards the star leaving an interior dust ring of small-sized particles.

However Dr Farzana Meru also notes that: “It may be the case that there are ALMA observations of protoplanetary discs that have already seen and recorded this dust ring signature while looking for other phenomena. If the same disc has been observed at different wavelengths – possibly by different teams – then a comparison of these observations might already be able to provide confirmation of our theory.”