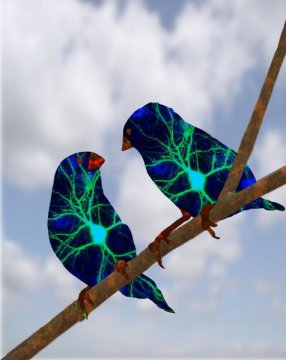 Youngsters learn many important behaviors by imitating adults. But young learners are selective in who they copy, and scientists don’t understand how they choose the right teacher.

Young male zebra finches must learn to copy the song of an adult tutor in order to ultimately attract a mate. Researchers already knew that juveniles don’t copy songs played through a loudspeaker or sung by other species of birds. Now, findings from Duke University scientists show how the juvenile birds identify the right teacher.

The study, which appears early online Oct. 17 in the journal Nature, reveals that being near a singing tutor activates connections between a social area of the young bird’s brain and the part of the brain responsible for the juvenile’s ability to sing. If those connections aren’t activated, a young finch fails to copy the tutor’s song.

“In humans it’s clear that being able to learn species-specific behaviors like speech is really important,” said Richard Mooney, the George Barth Geller professor of neurobiology. “Birdsong is one of the very few examples in the animal world where a behavior is transmitted from one generation to the next by imitation as opposed to genetic inheritance.” The fact that birds learn “speech” as we do gives researchers the opportunity to use the animals to study how a young learner memorizes someone else’s actions and then eventually learns to imitate those actions.

The researchers focused their work on two areas of the finch’s brain. The first is the part of the cortex essential for singing and is a bit like Broca’s area in the human brain, which is essential to speech. The second is a pinhead-sized region known as the periaqueductal grey or PAG, which contains a group of nerve cells that release dopamine and, in mice, respond to other mice. In the finch, these dopamine-secreting PAG neurons send long fibers that end in the song cortex.

In young birds who hadn’t met a tutor before, the researchers found that PAG neurons lit up with activity in the presence of a singing adult male, but were silent when the juvenile encountered quiet males or adult females, which do not sing, or heard zebra finch songs played over a speaker. The activity in the juvenile’s PAG continued for a short while even after the tutor stopped singing, meaning that the neurons likely respond to something other than sound — possibly social cues from the older bird. In fact, turning off the PAG in juveniles caused them to ignore their tutors, suggesting that this brain area affects the young finch’s ability to recognize and attend to an appropriate tutor.

Scientists have known for decades that zebra finches have a sensitive period for song learning. If juveniles don’t meet a suitable tutor before they are 60 days old, they grow up to sing songs that are much simpler than those they might learn from a tutor. Notably, these simple songs are much less attractive to females, putting the unschooled bird at a serious disadvantage for mating.

When the researchers prevented the PAG brain region from communicating with the song cortex during the sensitive period, the juvenile bird grew up to sing very simple songs, as if it had never heard any tutor at all. But blocking this pathway just after a pupil’s daily session with a tutor did not affect its ability to copy the older finch’s song.

When the research team activated the dopamine-releasing PAG region while playing adult male zebra finch songs through a speaker, juvenile birds copied the song, even though there wasn’t a real bird there.

Dopamine is important for learning that is reinforced by external rewards, such as money or candy, Mooney said. Because this pathway in the bird involves the same molecule, it’s possible that, for the pupil, meeting the right teacher serves as its own reward.

Going forward, Mooney and his team will investigate how this group of cells influences other behaviors, particularly courtship behaviors.

“One idea is that this dopamine pathway helps the young songbird recognize and internalize an appropriate example of adult male courtship behavior,” Mooney said. “Then, when the pupil reaches adulthood, that same pathway is recruited to ‘recall’ that behavior, allowing him to effectively woo a nearby female.”