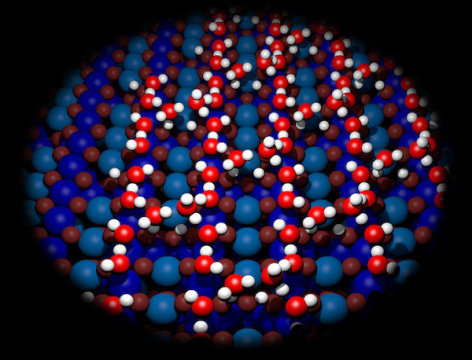 Water is an extremely complex liquid. The way in which separate water molecules accumulate on various materials has a crucial impact on a great many processes, including corrosion and weathering, and is key in ensuring that catalysts function optimally. A team based at TU Wien has now managed to uncover the mystery behind the structure of water molecules on iron oxide surfaces, and their work has revealed that water molecules can form of complex structures reminiscent of bridges, which play a significant role when it comes to chemical reactions on the surface.

The special properties of water

The repercussions of this are wide-ranging. For example, hydrogen bridge bonds are the reason that water needs to reach the high temperature of 100°C before it boils. They are also a key factor in the structure of proteins.

These bonds even come into play time and time again for completely unscientific assertions, as people claim they allow for mysterious ‘information’ to be stored in water. This is physically impossible because hydrogen bridge bonds are not very strong at all and are broken down again in a split second in liquid water. Nevertheless, you can see very different results when water molecules accumulate on surfaces, where incredibly complex, stable structures form at low temperatures.

The realms of possibility

“There had already been indirect indications of this type of structure forming,” says Ulrike Diebold (TU Wien). “But in order to really make the structure of water visible on iron oxide surfaces, we had to optimise the very best state-of-the-art measurement techniques further and really push the boundaries of what is possible.”

At the same time, a special vibration-proof, high-performance microscope was used to produce high-resolution images of the surface, so that the water structures could actually be seen. In addition to this, sophisticated computer simulations were developed as a way of explaining the geometrical positioning of the water molecules at the quantum level. “Finally we have three tools at our disposal that allow us to study the water structures, and that’s what’s needed if you want to get reliable results,” says Gareth Parkinson. “All three analyses match up perfectly, leaving us to conclude with great confidence that we now understand the formation of water structures on iron oxide surfaces.”

The evidence shows that several structures are formed: it is rare that a single water molecule sits on the surface alone, with water molecules instead tending to gather in pairs or groups of three. Then you have more complex structures consisting of six or eight molecules, which span the surface of the iron oxide like elliptically curved bridges.

“Our primary objective was to develop the analytical methods to the point that we could obtain irrefutable proof of these molecular structures. And that’s what we did,” says Ulrike Diebold. “The method that we used here for iron oxide can also be applied to other materials.”