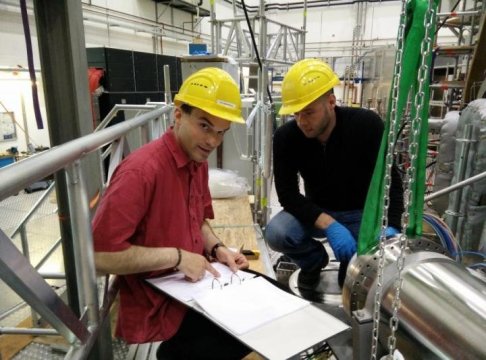 When Germany’s Wendelstein 7-X (W7-X) fusion facility set a world record for stellarators recently, a finely tuned instrument built and delivered by the U.S. Department of Energy’s (DOE) Princeton Plasma Physics Laboratory (PPPL) proved the achievement. The record strongly suggests that the design of the stellarator can be developed to capture on Earth the fusion that drives the sun and stars, creating “a star in a jar” to generate a virtually unlimited supply of electric energy.

The record achieved by the W7-X, the world’s largest and most advanced stellarator, was the highest “triple product” that a stellarator has ever created. The product combines the temperature, density and confinement time of a fusion facility’s plasma — the state of matter composed of free electrons and atomic nuclei that fuels fusion reactions — to measure how close the device can come to producing self-sustaining fusion power. (The triple product was 6 x 1026 degrees x second per cubic meter — the new stellarator record.)

The achievement produced temperatures of 40 million degrees for the ions and an energy confinement time, which measures how long it takes energy to leak out across the confining magnetic fields of 0.22 seconds. (The density was 0.8 x 1020 particles per cubic meter.) Measuring the temperature was an x-ray imaging crystal spectrometer (XICS) built by PPPL physicist Novimir Pablant, now stationed at W7-X, and engineer Michael Mardenfeld at PPPL. “The spectrometer provided the primary measurement,” said PPPL physicist Sam Lazerson, who also collaborates on W7-X experiments.

Pablant implemented the device with scientists and engineers of the Max Planck Institute of Plasma Physics (IPP), which operates the stellarator in the Baltic Sea town of Greifswald, Germany. “It has been a great experience to work closely with my colleagues here on W7-X,” Pablant said. “Installing the XICS system was a major undertaking and it has been a pleasure to work with this world-class research team. The initial results from these high-performance plasmas are very exciting, and we look forward to using the measurements from our instrument to further understanding of the confinement properties of W7-X, which is a truly unique magnetic fusion experiment.”

Researchers at IPP welcomed the findings. “Without XICS we could not have confirmed the record,” said Thomas Sunn Pedersen, director of stellarator edge and divertor physics at IPP. Concurred physicist Andreas Dinklage, lead author of a Nature Physics paper confirming a key feature of the W7-X physical design: “The XICS data set was one of the very valuable inputs that confirmed the physics predictions.”

PPPL physicist David Gates, technical coordinator of the U.S. collaboration on W7-X, oversaw construction of the instrument. “The XICS is an incredibly precise device capable of measuring very small shifts in wavelength,” said Gates. “It is a crucial part of our collaboration and we are very grateful to have the opportunity to participate in these important experiments on the groundbreaking W7-X device.”

PPPL has designed and delivered additional components installed on the W7-X. These include a set of large trim coils that correct errors in the magnetic field that confines W7-X plasma, and a scraper unit that will lessen the heat reaching the divertor that exhausts waste heat from the fusion facility.

The recent world record was a result of upgrades that IPP made to the stellarator following the initial phase of experiments, which began in December 2015. Improvements included new graphite tiles that enabled the higher temperatures and longer duration plasmas that produced the results. A new round of experiments is to begin this July using the new scraper unit that PPPL delivered.

Stellarators, first constructed in the 1950s under PPPL founder Lyman Spitzer, can operate in a steady state, or continuous manner, with little risk of the plasma disruptions that doughnut-shaped tokamak fusion facilities face. But tokamaks are simpler to design and build, and historically have confined plasma better, which accounts for their much wider use in fusion laboratories around the world.

An overall goal of the W7-X is to show that the twisty stellarator design can confine plasma just as well as tokamaks. When combined with the ability to operate virtually free of disruptions, such improvement could make stellarators excellent models for future fusion power plants.