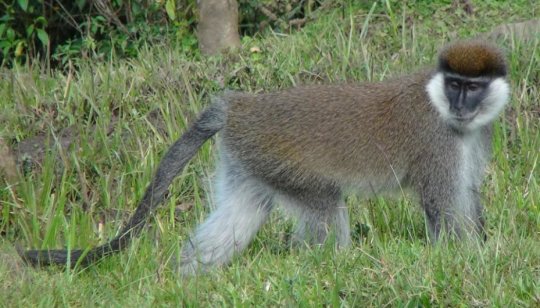 Bale monkey’s that live in continuous bamboo forests have different mitochondrial DNA to Bale monkeys living in fragmented forests, according to a study published in the open access journal, BMC Evolutionary Biology.

Dr Addisu Mekonnen, corresponding author of the study, explains: “Remarkably, our phylogenetic analysis showed that Bale monkeys in fragmented forests are more closely related to their sister species, vervets and grivets, than Bale Monkeys from continuous forests. This suggests that hybridization had taken place between Bale monkeys from fragmented forests and vervet and grivet monkeys, but not with bale monkeys in continuous forests. This hybridization could be due to habitat fragmentation and close proximity to similar monkeys.”

The authors explain that Bale monkeys, similar to giant pandas and bamboo lemurs, are particularly vulnerable to changes in their habitat as they rely heavily on bamboo and inhabit a small geographic area and are assumed to be less flexible at adapting to a changing environment than a species who don’t rely so heavily on one food source and one area.

Bale Monkeys are severely affected by habitat fragmentation and have the most restricted range of all green monkeys. The results of this study suggest that the altered gene pool of Bale Monkeys in Fragmented Forests has made them less dependent on bamboo lifestyle. “Similar to other bamboo specialist mammals, such as giant pandas and bamboo lemurs, Bale monkeys are currently at high risk of extinction in the wild because of habitat alteration. They are classified as a vulnerable species by the IUCN Red List of Threatened Species with a general trend of population decline.”

Bale monkeys are one of the least studied African primates so collecting baseline data on population genetic structure and evolutionary history are crucial for assessing their conservation status and protecting them. In terms of advising conservation, because of two isolated populations (with one cluster consisting of hybrids) 2 separate management structures should be defined to preserve the unique genetic diversity of the species and the evolutionary potential. For the CF population they recommend special protection as these represent what are thought to be typical Bale monkeys.

Improved protection from logging of bamboo could help them. For the FF population they recommend connecting forest fragments to increase gene flow between isolated groups.

Faecal samples were collected from May to December 2013 at three localities in Continuous Forest and nine localities in Fragmented Forest. Mitochondrial DNA was extracted from these samples and analysed.

The authors note that the genetic analysis should be interpreted with caution because they used a single and maternally inherited mitochondrial DNA locus that tells only the maternal history. The researchers explain that further future research focusing on bi-parentally and paternally inherited genetic markers, as well as morphological and ecological studies is needed to further understand the evolutionary history of this unusual and rare species.