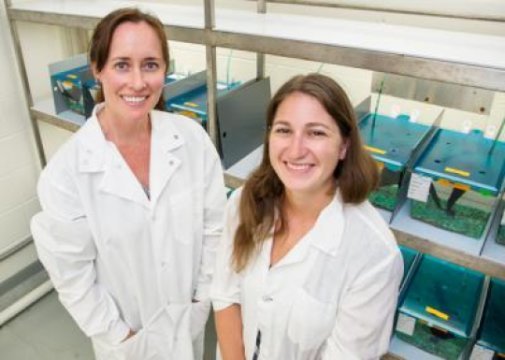 Throughout the living world, parents have many ways of gifting their offspring with information they will need to help them survive. A new study in Nature Ecology and Evolution examining the effects of exposure to predators across two generations of stickleback fish yielded a surprising insight into how such transgenerational information is used.

The study was led by Laura Stein, who began the work as a doctoral student in the laboratory of University of Illinois animal biologist Alison Bell. Stein, Bell, and doctoral student Abbas Bukhari found that when either a stickleback father or his offspring experienced the threat of predation, the offspring responded with the same adaptive strategy — developing to be smaller and more timid. Even if both generations experienced the threat, the developmental differences in size and behavior remained the same.

Bell’s research group is interested in how experience (nurture) and genetic information (nature) merge to determine how animals develop and behave. To understand this research, the animal’s complete set of genetic information, its genome, can be envisioned as an instruction manual. Written out in the genome’s DNA is the accumulated knowledge of the past environmental challenges faced by that species, an evolved guide for what strategies might aid survival in subsequent generations.

If biological information is written into the genome, how can experience change the course of development? Stimuli from the environment change how genes are accessed and read, their “expression,” so while the information in the organism’s genomic instruction manual stays the same, the frequency with which different instructions are referenced changes, resulting in different behaviors and traits.

“I have always been fascinated by the idea of transgenerational plasticity, or the ability of parents to influence offspring development based on their own experiences and environment,” Stein said. “In this study, we wanted to directly compare cues from fathers, from personal experience, and what happens when individuals receive cues from both that are in agreement.”

To answer this question, the researchers examined the response of sticklebacks to different combinations of paternal and personal experience: half of the father fish in the study were exposed to a model predator in the lab as they cared for a clutch of eggs, while the other half were not. Of the fish emerging from the clutches in these two groups, half of the fish were themselves exposed to a model predator, while the other half were not.

“We predicted we would see a gradient of responses: paternal experience would produce offspring with moderate antipredator phenotypes, personal experience would yield greater antipredator responses, and the combination of both cues would produce the strongest response,” Stein said. “One way to think about this prediction is via environmental certainty: if your father cues you in that there are predators in the environment, but you never encounter them, you might not want to invest the energy into developing antipredator phenotypes … If you personally experience a predator, however, you can be fairly sure there are predators around!”

So the group was surprised to find that regardless of whether offspring fish had paternal experience, personal experience, or both, they responded to predation risk with the same degree of reduced size and increased timidity. Stein and her coauthors were curious what this suggested about how the information was transmitted via gene expression. Was information from the two different sources being funneled into the same pathways in the brain, resulting in identical outcomes? Or did two entirely separate processes arrive at the same end result?

“When we analyzed the genes that were shared among paternal, personal, and both cues, we were very surprised to see that they were all regulated in the same directions!” Stein said. According to these results, paternal experience and personal experience predominantly activated a shared set of molecular responses, perhaps helping to explain on a mechanistic level why either or both were able to produce the same developmental outcomes.

Future work could explore in greater detail the genomic changes that distinguish responses to each source of experience, as well as those that are shared.

“One of the hypotheses that is prompted by the finding of this incredible overlap, especially in the animals that are getting both sorts of information, is that this is happening at the gene regulatory level, and that there is something comparable to a molecular switch that gets activated,” Bell said.

The researchers are also eager to delve further into the surprising result that different sources of information are not additive. In her new faculty position at the University of Oklahoma, Stein plans to investigate how changing costs and benefits of adaptive responses in different environments might help determine whether those responses are additive or not. Perhaps in an environment where food is much harder to find, for example, fish could not afford to become so small and timid in response to paternal information alone.

“Sticklebacks that are adapted to different kinds of predator environments, for example, might pay more or less attention to their genes versus what their parents are telling them versus what their own experience is telling them,” Bell said. “Comparing genotypes of sticklebacks from different populations that have different evolutionary histories with predation risk … that’s something I think would be really cool.”

This work was made possible by funding from the National Institutes of Health and the National Science Foundation.