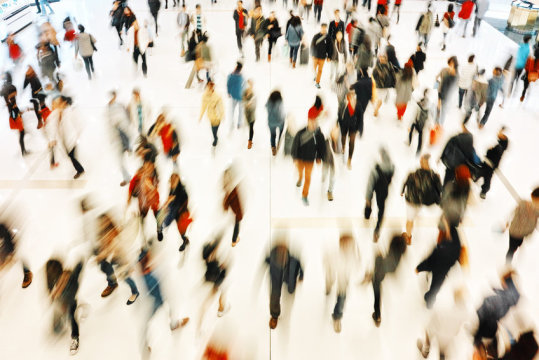 Electrons whizzing around each other and humans crammed together at a political rally don’t seem to have much in common, but researchers at Cornell are connecting the dots.

They’ve developed a highly accurate mathematical approach to predict the behavior of crowds of living creatures, using Nobel Prize-winning methods originally developed to study large collections of quantum mechanically interacting electrons. The implications for the study of human behavior are profound, according to the researchers.

For example, by using publicly available video data of crowds in public spaces, their approach could predict how people would distribute themselves under extreme crowding. By measuring density ﬂuctuations using a smartphone app, the approach could describe the current behavioral state or mood of a crowd, providing an early warning system for crowds shifting toward dangerous behavior.

Tomas Arias, professor of physics, is lead author of “Density-Functional Fluctuation Theory of Crowds,” which published Aug. 30 in Nature Communications. Co-authors include Itai Cohen, professor of physics; and Yunus A. Kinkhabwala, a doctoral student in the field of engineering.

To achieve this, they applied mathematical concepts and approaches from density-functional theory (DFT), a branch of many-body physics developed for quantum mechanical systems, to the behavior of crowds.

To test their theory, the researchers created a model system using walking fruit flies (Drosophila melanogaster). They first demonstrated a mathematical way to extract functions that quantify how much the flies like different locations in their environment — the “vexation” function — and how much they mind crowding together — the “frustration” function based on the details of how the population densities change as the flies more around.

They then showed that by mixing and matching this information with observations of a single fly in an entirely new environment, they could accurately predict, before any observations, how a large crowd of flies would distribute themselves in that new environment. They also tracked changes in the overall behavior of the crowd — i.e., its “mood” — by tracking evolution of the social preference “frustration” function.

While fruit flies were “a convenient, and ethical, first test system,” Arias said, the behavior of a crowd at a political rally would provide a human example of DFT theory. Individuals will try to find the best location to stand — typically closest to the stage — while avoiding overcrowded areas. When new and better locations become available, individuals are likely to move toward them.

To develop a mathematically predictive theory, the researchers associated a number — the vexation function — with the intrinsic desirability of each location; the lowest value would be at the ideal location, closest to the stage. The frustration function accounts for the undesirability of crowding effects, and a behavioral rule accounts for the tendency of individuals to look for better locations.

“The remarkable mathematical discovery,” Arias said, “is that precise values for vexation and frustration can be obtained instantly and automatically, simply by observing changes in crowding as the crowd mills around, without the need for any kind of survey to ask people in the crowd how they feel about different locations or crowding together.”

By varying the social circumstances in their fly experiments — such as changing the ratio of male and female, or inducing hunger and thirst — and monitoring the frustration values of the crowd, the researchers showed they can detect changes in the “mood” of the crowd. The DFT approach, therefore, not only predicts crowd behaviors under new circumstances, but also can be used to quickly and automatically detect changes in social behaviors.

Another application, using cell-phone and census data, could analyze political or economic drivers and population pressures to describe and predict large-scale population flows, such as mass migrations. “The resulting predictions of migration during acute events would enable better planning by all levels of government oﬃcials, from local municipalities to international bodies, with the potential to save millions of human lives,” note the researchers.