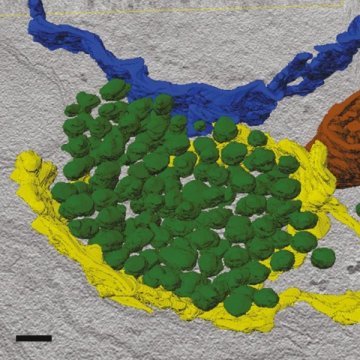 Synapses are the interfaces for information exchange between neurons. Teams of scientists working with Professor Dr. Volker Haucke, Director at the Leibniz-Forschungsinstitut für Molekulare Pharmakologie (FMP) and Professor at the Freie Universitaet Berlin, and Professor Dr. Stephan Sigrist at the Freie Universität Berlin discovered the materials, which form new presynapses for the release of transmitters. The findings may help to design better nerve-regenerating therapies in the future.

To date, we have a fairly good understanding how nerve cells (neurons) communicate with each other. Central in this information transfer is the release of neurotransmitters at chemical synapses. At synapses, signal-transmitting presynapses face postsynapses, which recognize the chemical signals and relay them. “By contrast, we still know relatively little as to how synapses are formed,” points out Professor Volker Haucke.

The release of neurotransmitter at presynapses requires their storage synaptic vesicles (bubble-like structures). Furthermore, scaffold proteins have to be present at the right time and location to ensure proper transmitter release. Until now, it was unclear how synaptic vesicle components and scaffold proteins get to synaptic cell junctions. Moreover, it was unclear from which cellular building blocks scaffold proteins and vesicles are made. The teams of Professor Dr. Volker Haucke and Professor Dr. Stephan Sigrist studied neurons from mouse brain and Drosophila larvae to learn more about the processes forming presynapses. The results of their work have just been published in the journal Neuron on August 30, 2018.

The scientists found answers to both questions: They discovered that for the most part, vesicle and scaffold proteins are co-transported to the presynapse in a packet. Hence, vesicle and scaffold proteins arrive at the nascent synapse as a preformed functional unit, so neurotransmitter release may start instantaneously. The scientists could also show that this mechanism is evolutionary conserved from flies to mice and probably humans. The team also revealed that scaffold and vesicle proteins are transported in organelles that share characteristics with so-called lysosomes. Professor Haucke explains: “This is extremely surprising as scientists used to believe that lysosomes are mostly responsible for the degradation of cell components. However, in the context of the developing nervous system, these lysosome-related vesicles appear to have a distinct assembly function as they are involved in forming the presynapses where transmitters are released.”

These discoveries made by the scientists at the Leibniz-Forschungsinstitut für Molekulare Pharmakologie and the Freie Universitaet Berlin are of significance beyond basic research: For example, during learning processes synapses need to be remodelled to amplify signals. Professor Dr. Stephan Sigrist comments: “We were able to establish such a signal amplification in Drosophila larvae. When we programmed the neurons to deliver additional scaffold proteins and transport packets, they fired with more intensity than before.” This correlation may prove useful in the treatment of congenital degenerative neuronal diseases or for the regeneration of neurons after major accidents for example. To enable injured people to walk again, nerve paths must regenerate and new synapses must form or be re-established. The described findings may allow to accelerate this process in a targeted fashion.