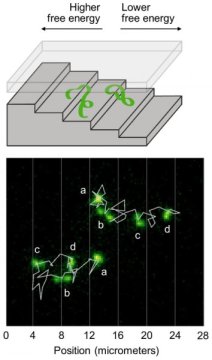 What drives cells to live and engines to move? It all comes down to a quantity that scientists call “free energy,” essentially the energy that can be extracted from any system to perform useful work. Without this available energy, a living organism would eventually die and a machine would lie idle.

In work at the National Institute of Standards and Technology (NIST) and the University of Maryland in College Park, researchers have devised and demonstrated a new way to measure free energy. By using microscopy to track and analyze the fluctuating motion or configuration of single molecules or other small objects, the new method can be applied to a greater variety of microscopic and nanoscopic systems than previous techniques.

“Scientists have relied on free energy to understand complex systems since the development of steam engines. This concept will continue to be just as fundamental as we engineer and design proteins and other single-molecule systems,” noted NIST’s David Ross, first author of a new paper (link is external) on this work in Nature Physics. “But the measurements are much harder for those small systems — so approaches like the new one we describe will be of fundamental importance,” he added.

By measuring changes in free energy as a system moves or alters its internal structure, scientists can predict certain aspects of how a living system will behave or how a machine will operate — without the impossible task of keeping track of the comings and goings of all the atoms and molecules that make up the system.

An everyday example of free energy is in the internal combustion engine of an automobile, with a total energy equal to the energy of its motion plus the heat it generates. Subtracting the heat energy, which dissipates from the system, leaves the free energy.

In one method, scientists use a microscopic force sensor to pull on a protein or DNA molecule, which can behave as a miniature spring when stretched or compressed, to measure changes in force and position as a system relaxes and releases energy. However, the attachment of the force sensor can disturb the microscopic system and cannot be used to measure changes in free energy that do not involve a straightforward change in position.

The new method, which can use optical microscopy to track the motion or configuration of small systems, determines free energies without the attachment to a force sensor. The new analysis could prove a powerful way to peer into the inner workings of a broad variety of microscopic systems, including living systems such as viruses or cells to better understand the processes, such as energy intake, chemical reactions and the movement of molecules that keep living systems functioning.

“We are surrounded by natural systems that take advantage of microscopic fluctuations in free energy, and now we have a way to better measure, understand, and, ultimately, manipulate these fluctuations ourselves,” said co-author Elizabeth Strychalski of NIST.

The analysis lends itself to studying microscopic systems that start in a highly excited state with high energy, far from equilibrium with their surroundings, and then relax back toward equilibrium. The properties of microscopic systems can fluctuate significantly as they relax due to the random motion from continuous jostling by surrounding molecules. The new method, which the team refers to as Relaxation Fluctuation Spectroscopy (ReFlucS), uses measurements of those fluctuations during relaxation to determine the free energy.

“Our approach shows that useful information can be gleaned from observing the random motions of a system as it settles down from a highly excited, far-from-equilibrium state,” said co-author Christopher Jarzynski of the University of Maryland.

As an exemplary system, the scientists studied the motion of DNA molecules confined to a nanometer-scale space shaped like a staircase. To squeeze into the top steps, which are the shallowest, the DNA molecules must be compressed more tightly than molecules that occupy the bottom steps. This results in a higher free energy for the molecules at the top. By applying an electric field, the team drove the DNA molecules into the top of the staircase. The researchers then turned off the electric field and observed the movement of the molecules with an optical microscope.