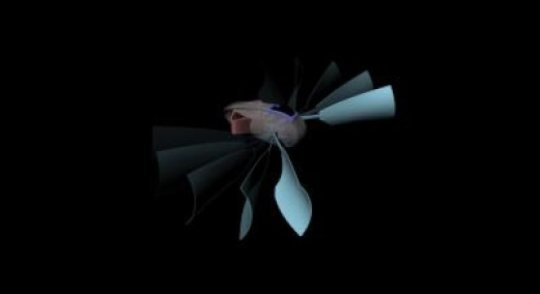 Researchers at ETH Zurich under the direction of ETH Professor Kristina Shea and colleagues at Caltech in Pasadena, California, have developed a new propulsion concept for swimming robots. The robot exploits temperature fluctuations in the water for propulsion without the need for an engine, propellant or power supply.

As a proof-of-concept study, the researchers developed a 7.5-centimetre mini-submarine equipped with paddles, which they fabricated entirely using a multi-material 3D printer. The researchers report on this in the journal PNAS.

The paddles are actuated using a bistable propulsion element triggered by two shape memory polymer strips as previously developed by Shea and her doctoral student Tim Chen. Designed to expand in warm water, the polymer strips power the robot by acting like “muscles.” If the water in which the mini-submarine floats is heated, the expansion of the “muscles” causes the bistable element to quickly snap, triggering a paddle stroke. The directional motion, force and timing of the paddle strokes are precisely defined by the robot’s geometry and material.

At present, each actuating element can execute a single paddle stroke and must then be reprogrammed manually. However, as the scientists point out, it is possible to fabricate complex swimming robots with multiple actuators. The scientists have already made a mini-submarine that can paddle forward with one stroke, release its “cargo” (a coin) and then navigate back to the starting point with a second paddle stroke in the opposite direction, all by sensing changes in temperature of the water. Varying the geometry of the polymer muscles allowed the scientists to define the sequence at which the paddle stroke is triggered: thin polymer strips heat up faster in warm water and therefore respond faster than thicker ones.

A potential development would be using polymers that do not react to the water temperature, but to other environmental factors such as the acidity or salinity of the water.

“The main takeaway from our work is that we have developed a new and promising means of propulsion that is fully 3D printed, tuneable and works without an external power source,” says ETH Professor Shea. This could possibly be developed further to create a low-power vessel for exploring ocean depths.