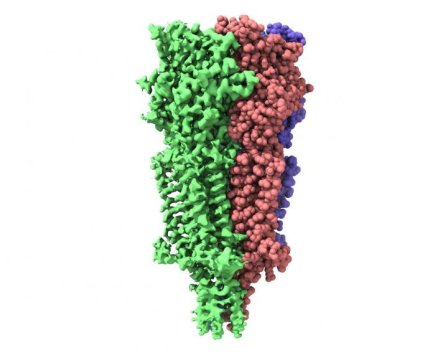 In November 2017, a Titan Krios cryo-electron microscope (cryo-EM) was inaugurated at the ESRF, the European Synchrotron, France. Data collected on this cryo-EM features in a Nature publication describing the activation cycle of a serotonin receptor, which is targeted by medication against chemotherapy- and radiotherapy-induced nausea.

“This publication is a true reward for us: the first one in less than a year from inauguration and we hope this kind of rewards will grow in number,” explains Isai Kandiah, ESRF scientist who runs the facility. “It shows the revolution that cryo-EM is leading in structural biology,” she adds. Thanks to cryo-EM, researchers can now freeze biomolecules, including membrane proteins of high medical importance, in several different conformations in action and visualise each of these to atomic resolution. Cryo-EM thus allows researchers to produce snapshots revealing the dynamics of proteins when they interact with other molecules, information that is crucial both for a basic understanding of life’s chemistry and for the development of pharmaceuticals.

The research in Nature is a result of an international collaboration of scientists from the Institute of Structural biology (IBS-mixed research unit CEA-CNRS-University Grenoble Alps), the Institut Pasteur, the University of Lorraine (France), the University of Copenhagen (Denmark), the University of Illinois (US) and the biotech company Theranyx. The focus of the paper, featuring data from the ESRF cryo-EM, is the activation cycle of the 5-HT3 receptor, belonging to the family of serotonin receptors. These receptors are well known because they influence various biological and neurological processes such as anxiety, appetite, mood, nausea, sleep and thermoregulation, among others. Unlike the other serotonin receptors, which are G protein-coupled receptors, 5-HT3 is a neurotransmitter-gated ion channel and changes its conformation during activation. It is present in the brain, as well as in the enteric nervous system, the peripheral nervous system that drives the digestive tract.

5-HT3 is a target for drugs and pharmaceutical companies have studied it extensively. When patients undergo chemotherapy and/or radiotherapy, they often suffer from nausea and vomiting as side effects. In fact, the chemicals used in cancer treatment trigger an elevation of serotonin signalling, which in turn activates 5-HT3 to open its ion channel, which then causes nausea.

“The receptor has been widely studied due to its importance, but it hasn’t been until recently, that we have accessed it at the atomic scale, thanks to cryo-electron microscopy, among other techniques,” explains Hugues Nury, main author of the paper and CNRS scientist at the IBS.

The results published in Nature show the receptor 5-HT3 in four different conformations. Images of three of these were obtained at the Center for Cellular Imaging and Nano Analytics in Switzerland whilst the fourth, which finally allowed a full understanding of the activation mechanism of 5-HT3, was obtained at the ESRF. One of the conformations is inhibited thanks to the binding of anti-nausea and anti-vomiting drug widely used in chemotherapy. The images obtained of the receptor may therefore lead to the design of more efficient antinausea drugs for the treatment of patients undergoing therapy for cancers.

“These results contribute to our knowledge on how 5-HT3 receptors behave. They provide a framework for the myriad of mutations described in the literature: we can now look where they are, what are the motions in these zones, and sometimes why the mutations altered the receptor function. Now we also see the binding pockets in unprecedented details, which can help the development of future drugs,” explains Hugues Nury.

Materials provided by European Synchrotron Radiation Facility. Note: Content may be edited for style and length.