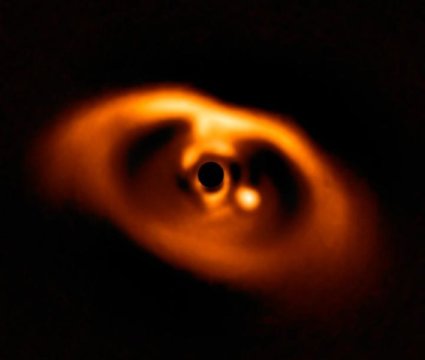 Astronomers led by a group at the Max Planck Institute for Astronomy in Heidelberg, Germany have captured a spectacular snapshot of planetary formation around the young dwarf star PDS 70. By using the SPHERE instrument on ESO’s Very Large Telescope (VLT) — one of the most powerful planet-hunting instruments in existence — the international team has made the first robust detection of a young planet, named PDS 70b, cleaving a path through the planet-forming material surrounding the young star [1].

The SPHERE instrument also enabled the team to measure the brightness of the planet at different wavelengths, which allowed properties of its atmosphere to be deduced.

The planet stands out very clearly in the new observations, visible as a bright point to the right of the blackened centre of the image. It is located roughly three billion kilometres from the central star, roughly equivalent to the distance between Uranus and the Sun. The analysis shows that PDS 70b is a giant gas planet with a mass a few times that of Jupiter. The planet’s surface has a temperature of around 1000°C, making it much hotter than any planet in our own Solar System.

The dark region at the centre of the image is due to a coronagraph, a mask which blocks the blinding light of the central star and allows astronomers to detect its much fainter disc and planetary companion. Without this mask, the faint light from the planet would be utterly overwhelmed by the intense brightness of PDS 70.

“These discs around young stars are the birthplaces of planets, but so far only a handful of observations have detected hints of baby planets in them,” explains Miriam Keppler, who lead the team behind the discovery of PDS 70’s still-forming planet. “The problem is that until now, most of these planet candidates could just have been features in the disc.”

The discovery of PDS 70’s young companion is an exciting scientific result that has already merited further investigation. A second team, involving many of the same astronomers as the discovery team, including Keppler, has in the past months followed up the initial observations to investigate PDS 70’s fledgling planetary companion in more detail. They not only made the spectacularly clear image of the planet shown here, but were even able to obtain a spectrum of the planet. Analysis of this spectrum indicated that its atmosphere is cloudy.

PDS 70’s planetary companion has sculpted a transition disc — a protoplanetary disc with a giant “hole” in the centre. These inner gaps have been known about for decades and it has been speculated that they were produced by disc-planet interaction. Now we can see the planet for the first time.

“Keppler’s results give us a new window onto the complex and poorly-understood early stages of planetary evolution,” comments André Müller, leader of the second team to investigate the young planet. “We needed to observe a planet in a young star’s disc to really understand the processes behind planet formation.” By determining the planet’s atmospheric and physical properties, the astronomers are able to test theoretical models of planet formation.

This glimpse of the dust-shrouded birth of a planet was only possible thanks to the impressive technological capabilities of ESO’s SPHERE instrument, which studies exoplanets and discs around nearby stars using a technique known as high-contrast imaging — a challenging feat. Even when blocking the light from a star with a coronagraph, SPHERE still has to use cleverly devised observing strategies and data processing techniques to filter out the signal of the faint planetary companions around bright young stars [2] at multiple wavelengths and epochs.

Thomas Henning, director at the Max Planck Institute for Astronomy and leader of the teams, summarises the scientific adventure: “After more than a decade of enormous efforts to build this high-tech machine, now SPHERE enables us to reap the harvest with the discovery of baby planets!”

[1] The disc and planet images and the planet’s spectrum have been captured in the course of the two survey programmes called SHINE (SpHere INfrared survey for Exoplanets) and DISK (sphere survey for circumstellar DISK). SHINE aims to image 600 young nearby stars in the near-infrared using SPHERE’s high contrast and high angular resolution to discover and characterise new exoplanets and planetary systems. DISK explores known, young planetary systems and their circumstellar discs to study the initial conditions of planetary formation and the evolution of planetary architectures.

[2] In order to tease out the weak signal of the planet next to the bright star, astronomers use a sophisticated method that benefits from the Earth’s rotation. In this observing mode, SPHERE continuously takes images of the star over a period of several hours, while keeping the instrument as stable as possible. As a consequence, the planet appears to slowly rotate, changing its location on the image with respect to the stellar halo. Using elaborate numerical algorithms, the individual images are then combined in such a way that all parts of the image that appear not to move during the observation, such as the signal from the star itself, are filtered. This leaves only those that do apparently move — making the planet visible.