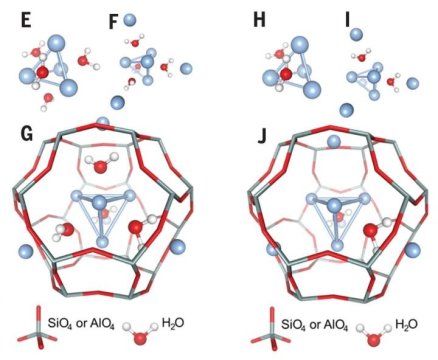 Zeolites have a very rigid and well-known structure containing numerous small channels and voids. In chemistry, they are used to stimulate certain reactions. Molecules that are ‘caught’ in the voids of the zeolites lose their mobility and start behaving differently. This research allowed the scientists to discover why and how silver clusters emit light when they are enclosed in the cages of a specific type of zeolite.

“We irradiated a mixture of silver clusters with synchrotron radiation at the European Synchrotron Radiation Facility in Grenoble,” explains researcher Didier Grandjean. “What is good about this is that it provides us with a lot of information on the structure and properties of the material. However, as we specifically wanted to look at the optical properties, we used a new method that deliberately only measured the emitted light. This way, we were sure that we were only looking at the specific particles responsible for the light.” The research provided conclusive evidence that only small clusters of four silver atoms in the form of a tetrahedron and surrounded by water molecules emit light.

“The tetrahedra form a unit in which two electrons can move freely. This forms a so-called super atom: a structure composed of several atoms, but behaving very much like a single atom,” says Professor Peter Lievens. “The optical properties of the clusters are caused by the two free electrons. These decay from a higher to a lower energy level, resulting in a certain shade of green light. In turn, the energy levels are determined by the chemical properties of the super atom.” This new observation can be attributed to an intense collaboration between researchers in chemistry and physics. “Furthermore, our experimental observations are confirmed by advanced theoretical calculations,” says Peter Lievens.

This new-found knowledge allows the researchers to start modifying the properties of silver clusters or find new materials with the desired optical properties. The results of this work are important for the study of light and its applications, among other things.

Materials provided by KU Leuven. Original written by Tine Danschutter, translated by Shana Michiels. Note: Content may be edited for style and length.