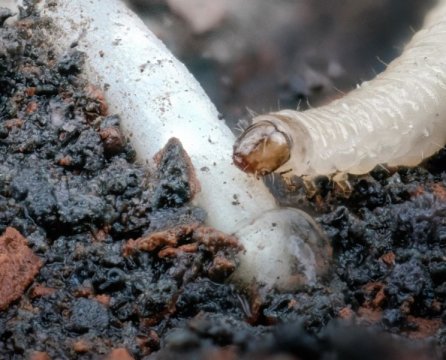 The Western corn rootworm causes annual losses of more than two billion US dollars in corn production, and is thus one of the economically most important pests in agriculture. The insect originates from America, but its occurrence in Europe has increased in recent years. It is resistant to many conventional pest control strategies, and the natural defense mechanisms of maize plants provide little protection against this particular enemy.

Christelle Robert and Matthias Erb from the University of Bern had shown in the past that the corn rootworm is resistant to the most important class of maize defense metabolites, the benzoxazinoids. Robert demonstrated that rootworm larvae are even attracted by benzoxazinoids and can use these substances for their own defense against beneficial nematodes. However, until now it was unclear which benzoxazinoids attract the rootworm. A combination of genetics, chemistry and behavioral ecology has now enabled the scientists to solve this puzzle: Rootworm larvae recognize specific iron complexes which are formed at the root surface when benzoxazinoids bind to iron.

The roots of young maize plants release benzoxazinoids, which bind to iron and form complexes in the soil. The researchers found that these complexes increase iron availability for maize plants and thus improve plant growth. But, the rootworm uses these exact same iron complexes too: Rootworm larvae use the benzoxazinoid-iron complexes to guide them to the nutrient-rich crown roots of maize plants. At the same time, they ingest these complexes for their own needs. “The corn rootworm has evolved a clever strategy to exploit its host plant’s ability to make iron biologically available. Tragically, this strategy enables the insect to severely damage maize plants and thereby cause massive crop failure,” says Christelle Robert. “This behavior also poses a dilemma for plant breeders: In order to get rid of rootworms, they would have to reduce the release of benzoxazinoids in the roots. However, this would also undermine the plants’ ability to absorb iron. Nevertheless, now that we understand how rootworms orient in the soil, we can start looking for ways to reduce rootworm damage.” The scientist explains that she has been thinking about the possibility of using iron complexes as attractants to divert rootworms from maize roots.

The results of the study highlight the dilemma faced by plants when an herbivore breaks through and evolves tolerance to a defense. “Since benzoxazinoids function both in herbivore defense and nutrient uptake, it is difficult for the plant to immediately stop producing a defense compound that has so many other important functions. The challenge will be to grow maize plants that are better able to defend themselves against the most damaging maize pest in the world without compromising their iron nutrition,” says Jonathan Gershenzon from the Max Planck Institute for Chemical Ecology. Together with Tobias Köllner and his team in Jena he contributed to the breeding of maize lines, which were knocked-out in different steps of benzoxazinoid biosynthesis. These lines were essential for the identification of the benzoxazinoid that — after binding to iron — forms the compound that the rootworm recognizes and uses as a cue for plant selection.

The fact that the Western corn rootworm is able to perceive iron complexes and to adjust its dietary behavior accordingly is also relevant for the understanding of food chains. “Many important trace elements are bound to organic molecules in nature. We therefore expect that other higher organisms also have the ability to perceive biologically available forms of trace elements and to ingest them to improve their nutrient balance,” says Matthias Erb. “The Western corn rootworm is a frustrating, yet highly fascinating pest that has just taught us a new trick of nature.”