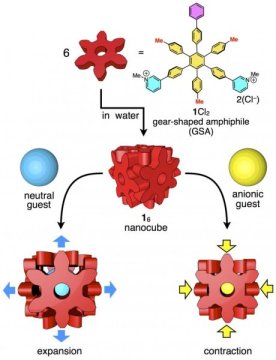 Researchers have identified the weak molecular forces that hold together a tiny, self-assembling box with powerful possibilities. The study demonstrates a practical application of a force common in biological systems and advances the pursuit of artificial chemical life.

“I want to understand self-assembly systems, which are essential for life. Building artificial self-assembling cubes helps us understand how biological systems function,” said Professor Shuichi Hiraoka, leader of the laboratory at the University of Tokyo Graduate School of Arts and Sciences where the boxes were designed, built, and analyzed.

The formation of DNA and proteins are biological examples of self-assembly, but the forces or processes controlling how these natural molecules come together also remain undefined. Investigations by Hiraoka’s team contribute to chemical understanding of how natural molecules might self-assemble and reveal techniques for mimicking those processes in the future.

Hiraoka and his team identified the forces holding together the sides of their tiny boxes as van der Waals forces, mainly dispersion forces. These forces are weak attractions between molecules created when electrons temporarily group together on one side of an atom. Geckos can walk up walls in part due to van der Waals forces.

Each side of the cube is formed from one molecule that is 2 nanometers in diameter and shaped like a six-pointed snowflake. Each side is about one-four-thousandth the size of a human blood cell. The weak forces holding the sides of the cube together make the box slightly flexible, so it adjusts to best accommodate guest molecules based on their size, shape, and atomic charge. The box can bulge to hold large or long contents and contract to eliminate extra space when hosting guest molecules with negative charge(s).

“We do not have the data yet, but the logical conclusion is that long chainlike guest molecules somehow fold to get inside the box,” said Hiraoka.

Researchers build the tiny box out of molecules of hexaphenylbenzene. The individual molecules exist as a dry, white powder. When mixed with water, the molecules spontaneously self-assemble into cubes.

“In solution, the six molecules come together so quickly that we cannot observe how they form cubes. The exact process of self-assembly remains a mystery,” said Hiraoka.

A cube that can self-assemble in water has the potential for future biological applications. The hexaphenylbenzene cube also holds together even above the boiling temperature of water, remaining stable up to 130 degrees Celsius (266 degrees Fahrenheit).

The six points of the snowflake-shaped hexaphenylbenzene molecules lock together when they assemble into a cube. Researchers describe the design of this molecular box as resembling the Japanese wood joining technique called hozo, where pieces of wood are held together without adhesives or hinges, using only intricate interlocking designs.

In addition to van der Waals forces, other forces also contribute to holding the box together, specifically the hydrophobic effect (exclusion of water molecules) and cation-? interactions (an attraction between molecular bonds and positively charged ions).

Hiraoka’s team uses physical chemistry techniques including nuclear magnetic resonance spectroscopy to characterize the box. Because the box only forms when mixed in water, researchers cannot use imaging techniques that require solid samples. The motion of the box as it self-assembles and bulges or contracts to host new molecules is not visible with techniques that require stationary samples.

Hiraoka’s research group first constructed a similar cube in 2008 and has worked to improve the water solubility and thermal stability since then.

The study is published in Nature Communications. Collaborators in Japan at Ritsumeikan University and Tokyo Institute of Technology also contributed to the research.