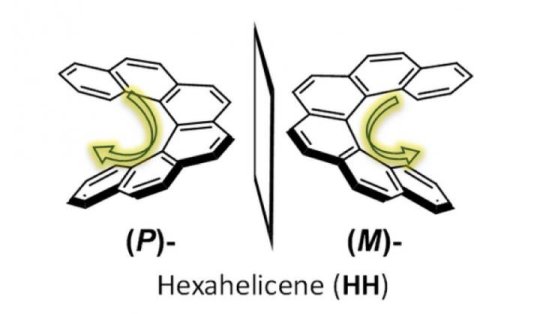 A research group led by Tadashi Mori at Osaka University aligned two hexahelicenes in various orientations, theoretically examined, and proposed that S- and X-shaped double hexahelicenes aligned in right symmetry were a key to improve the properties of helicenes. The researchers then synthesized double hexahelicenes to demonstrate their improved chiroptical properties as chiral materials: circular dichroism (CD) and circularly polarized luminescence (CPL). Their research results were published in Communications Chemistry.

They aligned multiple chiral hexahelicene units to thoroughly examine how their chiroptical properties would be enhanced by quantum chemical calculations. The results suggested that chiroptical performances were enhanced in S- and X-shaped helicenes aligned in right symmetry.

The researchers also examined the number of molecules to be aligned and the space between molecules and found the possibility that double helicenes, in which two helicenes are merged, could become ideal chiral materials.

Based on the discussion stated above, employing X- and S- shaped pristine double hexahelicenes (DNH and DPC) as representative molecular models, this group synthesized both double hexahelicenes, demonstrating drastic improvement of their chiroptical properties.

They pursued what factors control chiroptical responses and found that both intensity and orientation of the electric and magnetic transition dipole moments of the molecules were important.

This group demonstrated the new logical protocol for designing chiral materials: how to rationally align and design molecules. By using strategies beyond conventional ways of material development that were based on researchers’ intuition, the group drastically improved material development costs. Polarized light can be used for next-generation optical information technology, so this study will accelerate technical innovation in the development of advanced materials for 3D displays and endoscopes in medical applications, as well as security paint in information and communication fields.