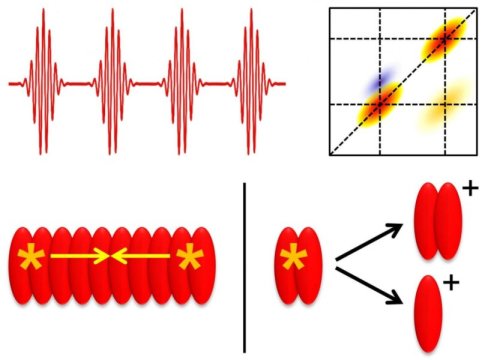 “Put an excitation into the system and observe how it evolves.” According to physicist Professor Tobias Brixner, this is the credo of optical spectroscopy. Various methods are known in literature. But generally only the behaviour of a single excitation and its consequences are investigated.

Now physicists and chemists of Julius-Maximilians-Universität Würzburg (JMU) in Bavaria, Germany, have presented two novel principles of optical spectroscopy in the journal Nature Communications. Both approaches show new developments of the so-called coherent two-dimensional (2D) spectroscopy. In conventional 2D spectroscopy, scientists excite a system at a specific frequency and observe what happens at another frequency.

“Instead of starting with one excitation and analysing its dynamics, we here deploy two excitations into the same system and observe how they interact,” says Professor Brixner, Head of the JMU Chair of Physical Chemistry I who is in charge of the research project at the University of Würzburg. This gives direct access, for example, to propagation phenomena (such as energy transport) because signals in the new method arise only if two initially separated excitations move and then meet.

The scientists illustrate the idea of “exciton-exciton-interaction-two-dimensional-(EEI2D)-spectroscopy” using a perylene bisimide-based J-aggregate. “J-aggregates are among the most important classes of supramolecular structures and the class of perylene bisimide dyes is ideally suited for such experiments,” Professor Frank Würthner explains; he heads the JMU Chair of Organic Chemistry II and collaborates in the study.

This method is applicable to numerous physical, chemical, biological or engineering systems, for example, to decode dynamic properties such as energy transport of natural light-harvesting systems and artificial dye aggregates.

Investigating ionization with the 2D scheme

The physicists in Tobias Brixner’s team conducted further research by combining coherent 2D spectroscopy with molecular beams “This has allowed us to investigate ionization with the 2D scheme for the first time,” the professor explains. For this purpose, they used mass spectrometry instead of optical detection and obtained 2D spectra not only for the parent molecule but simultaneously also for all photoproducts.

The physicists used the method exemplarily to identify the ionization pathways of 3d Rydberg states in nitrogen dioxide. In the future, this development will allow studying the influence of the environment on the coherent dynamics in larger molecules.

Both new approaches were developed within the scope of the research projects “Solar Technologies Go Hybrid” of DFG Research Unit 1809 and the ERC project “MULTISCOPE.”