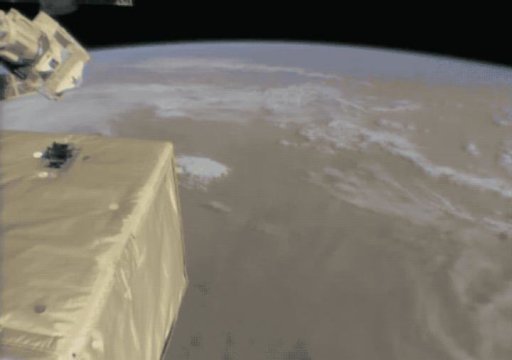 Astronomers keep coming up short when they survey “normal” matter, the material that makes up galaxies, stars and planets. A new NASA-sponsored CubeSat mission called HaloSat, deployed from the International Space Station on July 13, will help scientists search for the universe’s missing matter by studying X-rays from hot gas surrounding our Milky Way galaxy.

The cosmic microwave background (CMB) is the oldest light in the universe, radiation from when it was 400,000 years old. Calculations based on CMB observations indicate the universe contains: 5 percent normal matter protons, neutrons and other subatomic particles; 25 percent dark matter, a substance that remains unknown; and 70 percent dark energy, a negative pressure accelerating the expansion of the universe.

As the universe expanded and cooled, normal matter coalesced into gas, dust, planets, stars and galaxies. But when astronomers tally the estimated masses of these objects, they account for only about half of what cosmologists say should be present.

“We should have all the matter today that we had back when the universe was 400,000 years old,” said Philip Kaaret, HaloSat’s principal investigator at the University of Iowa (UI), which leads the mission. “Where did it go? The answer to that question can help us learn how we got from the CMB’s uniform state to the large-scale structures we see today.”

Researchers think the missing matter may be in hot gas located either in the space between galaxies or in galactic halos, extended components surrounding individual galaxies.

Other X-ray telescopes, like NASA’s Neutron star Interior Composition Explorer and the Chandra X-ray Observatory, study individual sources by looking at small patches of the sky. HaloSat will look at the whole sky, 100 square degrees at a time, which will help determine if the diffuse galactic halo is shaped more like a fried egg or a sphere.

“If you think of the galactic halo in the fried egg model, it will have a different distribution of brightness when you look straight up out of it from Earth than when you look at wider angles,” said Keith Jahoda, a HaloSat co-investigator and astrophysicist at NASA’s Goddard Space Flight Center in Greenbelt, Maryland. “If it’s in some quasi-spherical shape, compared to the dimensions of the galaxy, then you expect it to be more nearly the same brightness in all directions.”

The halo’s shape will determine its mass, which will help scientists understand if the universe’s missing matter is in galactic halos or elsewhere.

HaloSat will be the first astrophysics mission that minimizes the effects of X-rays produced by solar wind charge exchange. This emission occurs when the solar wind, an outflow of highly charged particles from the Sun, interacts with uncharged atoms like those in Earth’s atmosphere. The solar wind particles grab electrons from the uncharged atoms and emit X-rays. These emissions exhibit a spectrum similar to what scientists expect to see from the galactic halo.

“Every observation we make has this solar wind emission in it to some degree, but it varies with time and solar wind conditions,” said Kip Kuntz, a HaloSat co-investigator at Johns Hopkins University in Baltimore. “The variations are so hard to calculate that many people just mention it and then ignore it in their observations.”

In order to minimize these solar wind X-rays, HaloSat will collect most of its data over 45 minutes on the nighttime half of its 90-minute orbit around Earth. On the daytime side, the satellite will recharge using its solar panels and transmit data to NASA’s Wallops Flight Facility in Virginia, which relays the data to the mission’s operations control center at Blue Canyon Technologies in Boulder, Colorado.

“HaloSat has been a wonderful opportunity to get my hands on an instrument, work on the intricacies of something that’s going into space, and plan for all of the problems that go with that, which is a lot of fun,” said Daniel LaRocca, a UI graduate student on the mission team.

READ  Tech: Red and blue LED lights could be the key to preventing bird strikes -- (Report)

HaloSat measures 4-by-8-by-12 inches (about 10-by-20-by-30 centimeters) and weighs about 26 pounds (12 kilograms). It is the first science-focused astrophysics CubeSat mission, but a CubeSat called the Arcsecond Space Telescope Enabling Research in Astrophysics (ASTERIA), led by NASA’s Jet Propulsion Laboratory in Pasadena, California, launched in 2017 to demonstrate astrophysics technology. CubeSat missions usually take around three years to develop through launch and the start of data collection, the optimal amount of time for undergraduate or graduate students to be involved from start to finish.

“HaloSat has definitely shaped how I see my future playing out,” said Hannah Gulick, a UI undergraduate working on the mission. “I hope to be an astrophysicist who builds instruments and then uses the observations from those instruments to make my own discoveries.”

HaloSat is a NASA CubeSat mission led by the University of Iowa in Iowa City. Additional partners include NASA’s Goddard Space Flight Center in Greenbelt, Maryland, NASA’s Wallops Flight Facility on Wallops Island, Virginia, Blue Canyon Technologies in Boulder, Colorado, Johns Hopkins University in Baltimore and with important contributions from partners in France. HaloSat was selected through NASA’s CubeSat Launch Initiative as part of the 23rd installment of the Educational Launch of Nanosatellites missions.