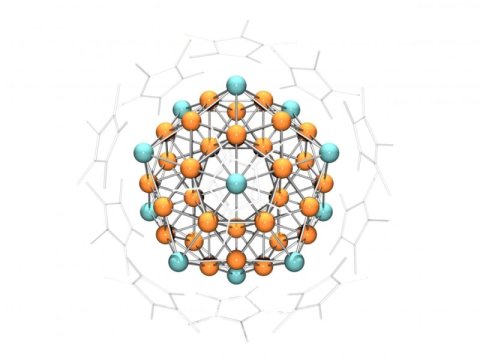 On the outside, the cluster made of 55 copper and aluminum atoms looks like a crystal, but chemically it has the properties of an atom. The heterometallic superatom which chemists of the Technical University of Munich (TUM) have created provides the prerequisites for developing new, more cost-effective catalysts.

Chemistry can be expensive. For example, platinum is used to clean exhaust gases. This precious metal acts as a catalyst which speeds up chemical reactions. Without catalysts, it would not be possible to carry out a large number of processes in the chemical industry.

“Many groups of researchers are experimenting with new material compounds made of lower-cost base metals such as iron, copper, or aluminum. However, so far nobody has been able to predict whether, how, and why these catalysts react,” explains Roland Fischer, Professor for Inorganic and Metal-Organic Chemistry at the TUM. “Our goal was to bridge this gap and to create the basis for understanding a new generation of catalysts.”

Together with his team, the chemist has now uncovered a secret of base metal compounds. “What was new about our approach was that we did not examine existing materials, but instead went bottom-up and built compounds made of individual copper and aluminum atoms,” explains Fischer.

Combining two metals at the atomic level requires no small amount of know-how and finesse: Within a protective argon atmosphere, the chemists combined the metal atoms which were bound to organic compounds in a test tube, to which they then added a solvent.

“Naturally, we hoped that the copper and aluminum atoms would separate from the organic compounds and form a cluster together. But whether they would actually do that and what the result would be was entirely unclear,” remembers Fischer.

The secret of the crystals

Hence, the chemists were extremely delighted to find that reddish-black particles with a diameter of up to one millimeter had formed at the bottom of the test tube. X-ray images revealed an extremely complex structure: In each case, 55 copper and aluminum atoms were arranged such that they formed a crystal whose surface consisted of 20 equilateral triangles.

Crystallographers call such shapes icosahedrons Additional experiments showed that chemically, the crystals react like an individual copper atom and are also paramagnetic, which means that they are attracted by a magnetic field.

An explanation for the extraordinary properties of the metal clusters was provided by Prof. Jean-Yves Saillard from the French university in Rennes: According to him, 43 and 12 aluminum atoms organize themselves into a “superatom” in which the metals form a shared electron shell which resembles that of a single metal atom.

Hence, the cluster has the chemical properties of an atom. Located on the outermost shell are three valence electrons whose spins align themselves in a magnetic field — hence the observed paramagnetism.

Knowledge base for new catalysts

The heterometallic superatom by the researchers in Munich is the largest one ever made in the lab. “That it formed spontaneously, i.e. without the input of energy, out of a solution is an extremely remarkable outcome,” emphasizes Fischer. “It shows that the arrangement of 55 atoms constitutes an island of stability and hence determines the direction in which the chemical reaction takes place.”

The researchers now intend to use the findings of the research project to develop fine-grained and hence highly effective catalyst materials. “We are still far away from being able to use it in applications,” emphasizes Fischer. “But based on what we have now achieved, we can verify the suitability of copper-aluminum clusters for catalytic processes and also create clusters made of other promising metals.”