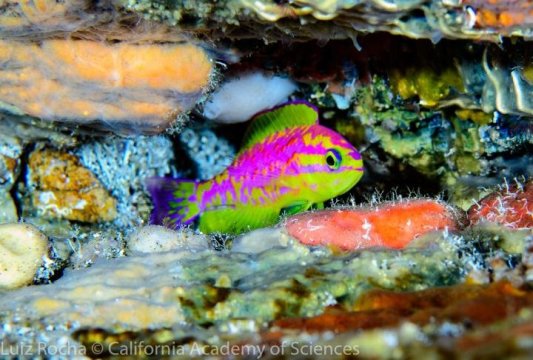 On a recent expedition to the remote Brazilian archipelago of St. Paul’s Rocks, a new species of reef fish — striped a vivid pink and yellow — enchanted its diving discoverers from the California Academy of Sciences. First spotted at a depth of 400 feet beneath the ocean’s surface, this cryptic fish inhabits rocky crevices of twilight zone reefs and is found nowhere else in the world. Upon discovery, the deep-diving team was so captivated by their finned find that they didn’t notice a massive sixgill shark hovering above them in an exciting moment captured on camera. The new fish description published today in Zookeys.

“This is one of the most beautiful fishes I’ve ever seen,” says Dr. Luiz Rocha, the Academy’s Curator of Fishes and co-leader of the Hope for Reefs initiative. “It was so enchanting it made us ignore everything around it.”

The sixgill shark stretched nearly ten feet long and cruised overhead as Rocha and post-doctoral fellow Dr. Hudson Pinheiro delicately collected the fish for further study back at the Academy. Behind the camera, the team’s diving officer Mauritius Bell enthusiastically announced the behemoth visitor to the duo, but to no avail. Aptly named, Tosanoides aphrodite enchanted its discoverers much like Aphrodite, Greek goddess of love and beauty, enchanted the ancient Greek gods.

“Fishes from the twilight zone tend to be pink or reddish in color,” says Pinheiro. “Red light doesn’t penetrate to these dark depths, rendering the fishes invisible unless illuminated by a light like the one we carry while diving.”

Back at the Academy, laboratory and collections manager Claudia Rocha helped the diving duo describe the new species: Males are outfitted with alternating pink and yellow stripes while females sport a solid, blood-orange color. Using a microscope, the team counted fins and measured spine length; DNA analysis revealed the new species is the first Atlantic-dwelling member of its genus.

The new denizen of the deep is a remarkable testament to the vast ocean habitats that still remain unexplored. Rocha and Pinheiro are part of a deep-diving research team that ventures to twilight zone reefs — mysterious coral habitats stretching across a narrow band of ocean 200 — 500 feet beneath the surface. In these deep reefs, animals live in partial darkness — beyond recreational diving limits, yet above the deep trenches patrolled by submarines and ROVs. As part of its Hope for Reefs initiative, the Academy team and their collaborators are exploring this unknown frontier with the help of high-tech equipment like closed-circuit rebreathers that allow scientists to extend their research time underwater.

Nearly 600 miles offshore the coast of Brazil, St. Paul’s Rocks is so remote that the diving team had to use the research vessel M/V Alucia as their homebase to explore the archipelago. The rocky outcroppings are extensions of the Mid-Atlantic Ridge — an active, tectonic plate boundary — puncturing the ocean’s surface. Given the region’s unique geology and isolated location, many of the species that live there are found nowhere else on Earth. Through their research, the Hope for Reefs team is finding that twilight zone habitats also host many location-specific species.

In a recent landmark paper, the team found that twilight zone reefs are unique ecosystems bursting with life and are just as vulnerable to climate change threats as their shallow counterparts. Their findings upended the long-standing assumption that species might migrate between habitats to avoid human-related stressors. As documented in the footage from this new fish’s discovery, a piece of fishing line can be seen streaming behind the sixgill shark — evidence that human impacts extend to depth too.

“In a time of global crisis for coral reefs, learning more about unexplored reef habitats and their colorful residents is critical to our understanding of how to protect them,” says Rocha. “We aim to highlight the ocean’s vast and unexplored wonders and inspire a new generation of sustainability champions.”

Materials provided by California Academy of Sciences. Note: Content may be edited for style and length.