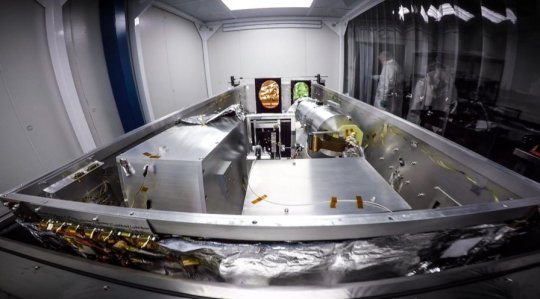 A new astronomical spectrograph built by a Penn State-led team of scientists provides the highest precision measurements to date of infrared signals from nearby stars, allowing astronomers to detect planets capable of having liquid water on their surfaces that orbit cool stars outside our Solar System. The Habitable Zone Planet Finder (HPF) allows precise measurement of a star’s radial velocity, measured by the subtle change in the color of the star’s spectra as it is tugged by an orbiting planet, which is critical information in the discovery and confirmation of new planets.

The HPF, located at McDonald Observatory at the University of Texas at Austin, targets low-mass planets around cool nearby M dwarf stars in Habitable Zones, regions where liquid water might exist on a planet’s surface. M dwarf stars are known to host rocky planets, but these stars are faint due to their size and their magnetic activity manifests as spots and flares, which pose problems for existing visible light instruments. The HPF, coupled to the 10-meter Hobby Eberly Telescope, instead uses near-infrared light — a type of invisible infrared light closest in wavelength to the visible spectrum — to observe these stars at wavelengths where they are brighter and less active.

“The HPF was built to be incredibly stable, and we added a calibrator called a laser frequency comb to increase precision,” said Suvrath Mahadevan, associate professor of astronomy and astrophysics at Penn State and Principal Investigator of the HPF project. “The laser comb, which was custom-built by the National Institute of Standards and Technology (NIST), separates individual wavelengths of light into separate lines, like the teeth of a comb, and is used like a ruler to calibrate the near-infrared energy from the stars. This combination of technologies has allowed us to demonstrate unprecedented near-infrared radial velocity precision with observations of Barnard’s Star, one of the closest stars to the Sun.” These results appear in the Feb 20 issue of the journal Optica.

“We are especially interested in finding Earth-like planets that orbit in the habitable zone of the nearest stars,” said Mike Endl, senior research scientist at McDonald Observatory. “These planets around nearby stars represent our best chance to characterize and study them in greater detail. The laser frequency comb at the HPF enables us to reach the high level of precision required to detect these small planets.”

“Detecting near-infrared wavelengths also poses tremendous technical challenges,” said Mahadevan. For example, the instrument is so sensitive to infrared light that heat emitted at room-temperature blinds the detector, requiring operations at very cold temperatures. The HPF was designed to overcome these challenges, and also offers an extremely high level of control over temperature and pressure — essential to proper functioning of the instrument.

“The Habitable Zone Planet Finder was and is a unique opportunity to push beyond the known solutions for finding planets that could potentially harbor life,” said Fred Hearty, senior scientist of astronomy and astrophysics at Penn State and the systems engineer of HPF. “Each advance we have made in the development of this instrument has revealed deeper and more subtle challenges.”

Larry Ramsey, distinguished scholar and professor of astronomy and astrophysics at Penn State, and one of the original inventors of the Hobby Eberly Telescope design added “The research and development journey for precision instruments like the Hobby-Eberly telescope began in the 1980’s at Penn State. Over the next decades, this led to the construction of several instruments that have greatly improved our ability to search for potentially habitable planets — from the Fiber Optic Echelle Instrument and the near-infrared Pathfinder instrument testbed to the powerful Habitable Zone Planet Finder, which has incredible spectral stability and the velocity sensitivity when coupled to the Hobby Eberly Telescope.”

Mahadevan attributed the success of HPF and its laser comb calibrator to the multi-disciplinary and multi-institution HPF team. “We would not have been able to push these astrophysical limits without pushing technical and engineering limits here on the ground,” he said, “or without the hard work, commitment and creativity of graduate students, postdoctoral fellows, research associate, faculty, and industry partners who have worked on HPF for almost a decade. These results will pave the way to breaking barriers in the near-infrared, enabling discovery of terrestrial-mass planets in Habitable Zones.”