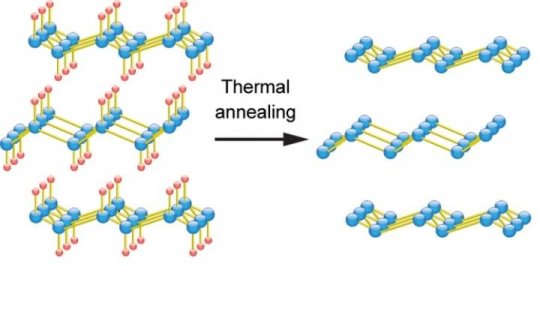 Germanene is a 2D material that derives from germanium and is related to graphene. As it is not stable outside the vacuum chambers in which is it produced, no real measurements of its electronic properties have been made. Scientists led by Prof. Justin Ye of the University of Groningen have now managed to produce devices with stable germanene. The material is an insulator, and it becomes a semiconductor after moderate heating and a very good metallic conductor after stronger heating. The results were published in the journal Nano Letters.

Materials of just one atomic layer are of interest in the construction of new types of microelectronics. The best known of these, graphene, is an excellent conductor. Materials like silicon and germanium could be interesting as well, as they are fully compatible with well-established protocols for device fabrication, and could be seamlessly integrated into the present semiconductor technology.

‘But the 2D version of germanium, germanene, is very unstable’, explains University of Groningen Associate Professor of Device Physics Justin Ye. Germanene is made from germanium by adding calcium. The calcium ions create 2D layers from a 3D crystal and are then replaced by hydrogen. These 2D layers of germanium and hydrogen are called germanane. But once the hydrogen is removed to form germanene, the material becomes unstable.

Ye and his colleagues solved this in a remarkably simple way. They made devices with the stable germanane, and then heated the material to remove the hydrogen. This resulted in stable devices with germanene, which allowed the scientists to study its electronic properties.

‘The initial material was an insulator’, says Ye. A Ph.D. student from his group heated these devices, which is a tried and tested method to increase conductivity. He noted that the material became very conductive, and its resistance was just one order of magnitude above that of graphene. ‘So it became an excellent metallic conductor.’ Further experiments showed that moderate heating (up to 200°C) produced semiconducting germanane.

Germanene can, therefore, be an insulator, a semiconductor or a metallic conductor, depending on the heat treatment with which it is processed. It remains stable after being cooled to room temperature. The heating causes multilayer flakes of germanene to become thinner — confirmation that the change in conductivity is most likely caused by the disappearance of hydrogen.

Germanene could be of interest in the construction of spintronic devices. These devices use a current of electron spins. This is a quantum mechanical property of electrons, which can best be imagined as electrons spinning around their own axis, causing them to behave like small compass needles. Graphene is an excellent conductor of electron spins, but it is hard to control spins in this material because of their weak interaction with the carbon atoms (spin-orbit coupling).

‘The germanium atoms are heavier, which means there is a stronger spin-orbit coupling’, says Ye. This would provide better control of spins. Being able to construct metallic germanene with both excellent conductivity and strong spin-orbit coupling should therefore pave the way to spintronic devices.