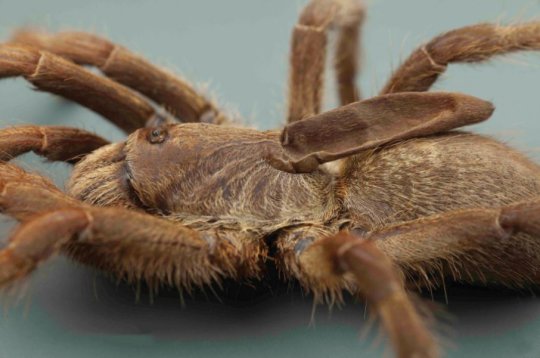 A new to science species of tarantula with a peculiar horn-like protuberance sticking out of its back was recently identified from Angola, a largely underexplored country located at the intersection of several Afrotropical ecoregions.

Collected as part of the National Geographic Okavango Wilderness Project, which aims to uncover the undersampled biodiversity in the entire Okavango catchment of Angola, Namibia and Botswana, thereby paving the way for sustainable conservation in the area, the new arachnid is described in a paper published in the open-access journal African Invertebrates by the team of Drs John Midgley and Ian Engelbrecht.

Although the new spider (Ceratogyrus attonitifer sp.n.) belongs to a group known as horned baboon spiders, the peculiar protuberance is not present in all of these species. Moreover, in the other species — where it is — the structure is completely sclerotised, whereas the Angolan specimens demonstrate a soft and characteristically longer ‘horn’. The function of the curious structure remains unknown.

The new tarantula’s extraordinary morphology has also prompted its species name: C. attonitifer, which is derived from the Latin root attonit- (“astonishment” or “fascination”), and the suffix -fer (“bearer of” or “carrier”). It refers to the astonishment of the authors upon the discovery of the remarkable species.

“No other spider in the world possesses a similar foveal protuberance,” comment the authors of the paper.

During a series of surveys between 2015 and 2016, the researchers collected several female specimens from the miombo forests of central Angola. To find them, the team would normally spend the day locating burrows, often hidden among grass tufts, but sometimes found in open sand, and excavate specimens during the night. Interestingly, whenever the researchers placed an object in the burrow, the spiders were quick and eager to attack it.

The indigenous people in the region provided additional information about the biology and lifestyle of the baboon spider. While undescribed and unknown to the experts until very recently, the arachnid has long been going by the name “chandachuly” among the local tribes. Thanks to their reports, information about the animal’s behaviour could also be noted. The tarantula tends to prey on insects and the females can be seen enlarging already existing burrows rather than digging their own. Also, the venom of the newly described species is said to not be dangerous to humans, even though there have been some fatalities caused by infected bites gone untreated due to poor medical access.

In conclusion, the researchers note that the discovery of the novel baboon spider from Angola does not only extend substantially the known distributional range of the genus, but can also serve as further evidence of the hugely unreported endemic fauna of the country:

“The general paucity of biodiversity data for Angola is clearly illustrated by this example with theraphosid spiders, highlighting the importance of collecting specimens in biodiversity frontiers.”

Apart from the described species, the survey produced specimens of two other potentially new to science species and range expansions for other genera. However, the available material is so far insufficient to formally diagnose and describe them.