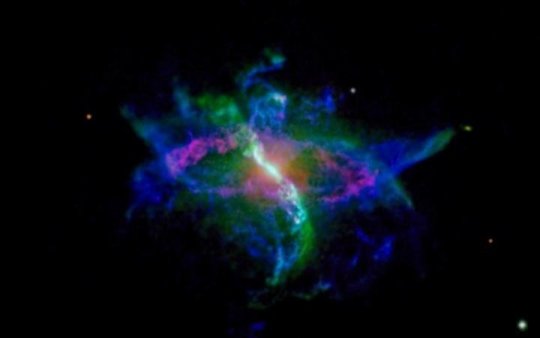 In astronomical terms, at 600 light years away, the nebula around R Aquarii is rather close to us. The symbiotic star itself is made up of a red giant and a white dwarf which have interacted over centuries to form the magnificent surrounding nebula from material ejected from the system.

This system, known as R Aquarii for its apparent location in the large zodiacal constellation of Aquarius, is an important example of the effects of the gravitational interactions that occur between nearby stars. In the later stages of their evolution, when stars like the Sun grow to giant dimensions, lowering the surface gravity and allowing prodigious amount of matter to escape, the gravitation pull of a nearby star can become the dominant cause of their further evolution and destiny. As shown by R Aquarii, matter lost by one star can be sculpted into complex, albeit symmetric, nebulae, and in the process highly collimated outflows, called jets, can form. Jets are a common phenomenon in the Universe, and found around binary stars and black holes, as well as in the centre of the largest and most powerful galaxies.

R Aquarii is the closest-known stellar jet, allowing these complex physical processes to be studied in unprecedented detail. Given its proximity, it has been possible to follow the evolution of the nebula and its jet in real time by patiently obtaining sequence of images over many years. The study recently published in the journal Astronomy & Astrophysics (A&A) used telescopes at the Roque de los Muchachos Observatory (Garafía, La Palma) and Chile over the course of more than 20 years.

“While the large hourglass nebula expands in a regular way, the jet shows an extremely complex behaviour” says Tiina Liimets, the first author of the article and PhD student at the University of Tartu’s Tartu Observatory (Estonia). The observations reveal the jets to be comprised of multiple knots of material, which at first glance don’t seem to be flowing linearly away from the centre. “Instead they seem to be moving in apparently random directions, merging together and breaking apart, appearing and disappearing from view” states David Jones, researcher at the Instituto de Astrofísica de Canarias and co-author of the work. “This indicates that at the observed scales other external factors dominate the apparent evolution of the jet and its curvature, including the changes in the illumination from the central stars.” adds Romano Corradi, Director of the Gran Telescopio the Canarias, and who obtained the first images for the study more than 25 years ago.

“We will continue to follow the evolution of R Aquarii over the coming decades, taking advantage of the next generation of telescopes and instruments, which will provide important information on this spectacular system and about the common processes that regulate the formation of all astrophysical jets” concludes Liimets.