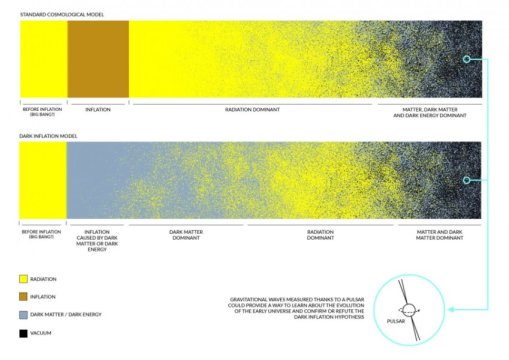 Dark matter and dark energy may have driven inflation, the exponential expansion of the Universe moments after the Big Bang. A new cosmological model proposed by physicists at the University of Warsaw, which takes dark inflation into account, is the first to outline a precise chronology of the main events during the early history of our Universe. The model makes a spectacular prediction: that it should be possible to detect gravitational waves that were formed just fractions of a second after the creation of spacetime.

What do we know about the evolution of Universe immediately after the Big Bang? In spite of extensive research carried out over decades, current cosmological models still do not outline a precise chronology of events. Researchers at the Faculty of Physics at the University of Warsaw (UW Physics) have developed a new model in which the exponential expansion of dark matter and dark energy plays a key role. The dark inflation model organises the thermal history of the Universe in chronological order and predicts that we should soon be able to detect primordial gravitational waves formed immediately after the Big Bang.

The earliest structure of the Universe we can study today is cosmic microwave background (CMB) radiation. This electromagnetic relic dates back to around 380,000 years after the Big Bang and is surprisingly homogenous, even in regions which are so far apart that light couldn’t have covered the distance between them in the time available. In 1979, Alan Guth proposed inflation as a simple explanation for this uniformity: the current vast distances between the homogenous regions are so great because at one time there was an extremely rapid expansion of spacetime, enlarging a billion billion billion times over in just fractions of a second. This is said to have been driven by a hypothetical inflation field and particles known as inflatons.

“The fundamental problem with inflation is that we don’t really know when exactly it occurred and at what energy levels. The range of energies at which inflation could have occurred is vast, stretching over 70 orders of magnitude,” explains Prof. Zygmunt Lalak (UW Physics). He adds, “Inflation is described as a period of supercooled expansion. However, for cosmological models to be consistent, following inflation the Universe should have undergone reheating to a very high temperature, and we have no idea how or when this might have occurred. Just like with inflation itself, we are dealing with energies across a range of 70 orders of magnitude. As a result, the thermal history of the Universe is yet to be described.”

Measurements of CMB radiation using the Planck satellite have been used to estimate the composition of the contemporary Universe. It turns out that dark energy comprises as much as 69% of all extant energy/matter, with dark matter comprising 26% and ordinary matter just 5%. Dark matter and ordinary matter don’t interact at all, or their interactions are so weak we are only just starting to notice dark matter’s gravitational impact on the movement of stars in galaxies and galaxies in clusters. Dark energy should be a factor responsible for the accelerated expansion of the Universe.

“Our inflation model is significantly different from those proposed in the past. We started with the assumption that since today dark matter and dark energy comprise up to 95% of the Universe’s structure, then both factors must have also been extremely important immediately after the Big Bang. This is why we describe the dark sector of the Universe as responsible for the inflation process,” explains Dr. Michal Artymowski (UW Physics), main author of the paper published in the Journal of Cosmology and Astroparticle Physics.

In the model proposed by the theoretical physicists from the University of Warsaw, inflation is driven by a scalar field. The properties of the field mean that inflation isn’t permanent and it must come to an end: at some point the rate of expansion of the Universe will start slowing down instead of accelerating. At the point of this shift, new relativistic particles are formed, behaving in the same way as radiation. Some of these particles are described by the Standard Model, while others may correspond to particles predicted by theories beyond the Standard Model, such as supersymmetry.

“In our models, the new particles are the result of gravitation, which is a very weak force. The process of formation of particles is ineffective, and at the end of inflation inflatons continue to dominate the Universe,” says Olga Czerwinska, PhD student at UW Physics.

In order to recreate the observed dominance of radiation in the Universe, inflatons should lose energy rapidly. The researchers propose two physical mechanisms which could be responsible for the process. They reveal that the new model predicts the course of events of the Universe’s thermal history with a far greater accuracy than previously.

The model’s predictions concerning primordial gravitational waves are especially interesting. Gravitational waves are vibrations of spacetime itself, and they have already been detected several times. In each case their source has been the merger of a pair of black holes or neutron stars. Current cosmological models predict that gravitational waves should also appear as a result of inflation. However, all the evidence suggested that vibrations of spacetime caused by inflation would be so weak by now that no existing or future detectors would have been able to register them. These predications were revised when physicists from the University of Warsaw took into account the effects of the dark sector of the Universe.

The estimates made by the Warsaw physicist are optimistic. Data suggests that primordial gravitational waves could be detected by observatories currently at the design stage or under construction, such as the Deci-Hertz Interferometer Gravitational Wave Observatory (DECIGO), Laser Interferometer Space Antenna (LISA), European Pulsar Timing Array (EPTA) and Square Kilometre Array (SKA). The first events could be detected in the coming decade. For cosmologists this would be an unprecedented discovery, paving the way for research into gravitational events which took place immediately after the Big Bang — a period hitherto impossible to study.

The dark inflation model has another fascinating aspect: it is highly dependent on gravitational theory. By comparing the model’s predictions with data collected by gravitational observatories, cosmologists should be able to provide new verifications of Einstein’s general theory of relativity. What happens if they find discrepancies? It would mean that observational data provides the first information on the properties of real gravity.