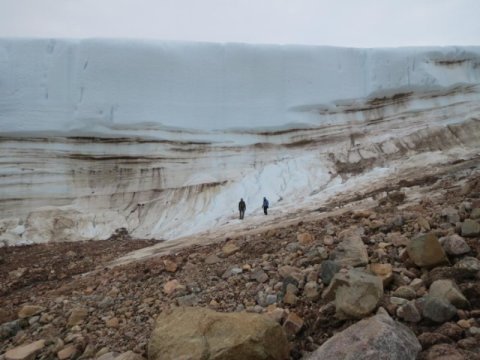 A tiny clue found in ancient sediment has unlocked big secrets about Greenland’s past and future climate.

Just beyond the northwest edge of the vast Greenland Ice Sheet, Northwestern University researchers have discovered lake mud that beat tough odds by surviving the last ice age. The mud, and remains of common flies nestled within it, record two interglacial periods in northwest Greenland. Although researchers have long known these two periods — the early Holocene and Last Interglacial — experienced warming in the Arctic due to changes in Earth’s orbit, the mix of fly species preserved from these times shows that Greenland was even warmer than previously thought.

This information could help researchers better gauge Greenland’s sensitivity to warming, by testing and improving models of climate and ice sheet behavior. Those models could then improve predictions of how Greenland’s ice sheet, which covers 80 percent of the Arctic country and holds enough ice to equal 20 feet of global sea level, might respond to human-made global warming.

“Northwest Greenland might feel really remote, but what happens to that ice sheet is going to matter to everyone in New York City, Miami and every coastal city around the world,” said Yarrow Axford, the study’s senior author and an associate professor of Earth and planetary sciences at Northwestern. “One of the big uncertainties in climate science remains how fast the Earth changes when it gets warmer. Geology gives us an opportunity to see what happened when the Earth was warmer than today.”

Published June 4 in the Proceedings of the National Academy of Sciences, the study included contributions from collaborators at Dartmouth College.

People might be surprised to see how today’s frigid Greenland looked during the last two interglacial periods. Today, northwest Greenland hovers in the 30s and low 40s Fahrenheit and weathers snowstorms in summer. But average summer temperatures in the early Holocene (8,000 to 11,000 years ago) and Last Interglacial (116,000 to 130,000 years ago) climbed well into the 50s.

During the Last Interglacial, global sea levels increased by 15 to 30 feet, largely due to thinning of Greenland and Antarctica’s ice sheets. But now Northwestern’s team believes northern Greenland’s ice sheet experienced stronger warming than previously thought, which could mean that Greenland is more responsible for that sea-level rise.

To measure these ancient temperatures, researchers look to ice cores and lake sediment cores. Because ice and lake sediment form by an incremental buildup on annual layers of snow or mud, these cores contain archives of the past. By looking through the layers, researchers can pinpoint climate clues from eons ago. Finding lake sediments older than about 10,000 years, however, has been historically very difficult in Greenland.

“The classic thing that glaciers do is slide,” Axford said. “So when the ice sheet grows larger, all this wonderful geology gets scooped up and spat out into the oceans.”

But Axford’s team found an area where this wasn’t the case.

The climate in northwest Greenland houses the perfect conditions to preserve the sediments within a small lake that Axford’s team affectionately calls “Wax Lips Lake” because of its shape.

“During the last ice age, the ice sheet there was just thin enough, and the atmosphere was just cold enough that the ice sheet froze to the ground instead of melting at its base and sliding,” said Jamie McFarlin, a Ph.D. student in Northwestern’s department of Earth and planetary sciences, who led the study. “It grew on top of itself and preserved most of the geology below.”

“The ice gently tip-toed over this spot instead of plowing over it,” Axford added.

After taking a two-meter-long tube of sediment from Wax Lips Lake’s lakebed, McFarlin combed through the layers to investigate those from the early Holocene and Last Interglacial periods. It was then that she noticed a mix of lake fly species, called chironomids, that suggested a warmer climate during both periods. Especially surprising: The Last Interglacial period swarmed with another type of insect known as the phantom midge. Although phantom midges have been reported in low abundance in northern climates, one would have to travel 1,000 miles south to Canada’s Labrador province to find phantom midges at comparable abundance to the Last Interglacial in northwest Greenland.

“As far as we know, it’s never been found in Greenland. We think this is the first time anyone has reported it in ancient sediments or modern lakes there,” Axford said. “We were really surprised to see how far north it migrated.”

Discovering this mix of insects means northwest Greenland’s average July during the last two interglacial periods most likely climbed above 50 degrees and possibly into the high 50s during the Last Interglacial. This confirms controversial geological records constructed from ice cores taken nearby, which also indicated significant warming during these time periods.

“Other records have shown that northern Greenland’s climate was much warmer than people expected during those periods, and those results received justified skepticism,” Axford said. “Now we have an independent record that confirms that when the Arctic warmed in the past, there was especially strong warming in northern Greenland.”

“This is the kind of ground-truthing that we need to get really accurate climate models and projections,” said Magdalena Osburn, an assistant professor of Earth and planetary sciences at Northwestern, who coauthored the study. “We’re finding that, in some cases, models don’t include temperatures that are warm enough for this part of the world.”

“Past climate is our best analog for future warming, and our results hint that land at these very high latitudes in the Arctic may warm even more than predicted in the coming century,” Axford said. “But nothing in Earth’s past is a perfect analog because what’s happening today is totally unprecedented.”

This work was supported by the National Science Foundation (NSF) Office of Polar Programs (awards 1108306 and 1107411), an NSF Graduate Research Fellowship, the Geological Society of America and the Institute for Sustainability and Energy at Northwestern.