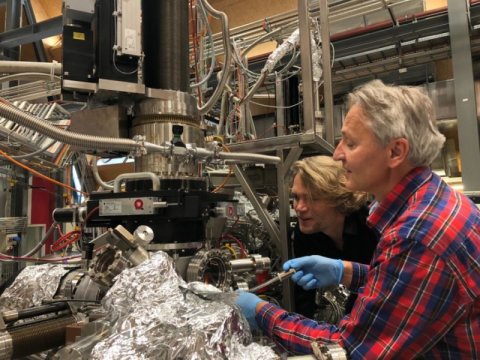 Spintronics is a field of physics that studies the spin of electrons, an intrinsic type of magnetism that many elementary particles have. The field of spintronics has given rise to technological concepts of “spintronic devices,” which would run on electron spins, rather than their charge, used by traditional electronics.

In order to build programmable spintronic devices we first need to be able to manipulate spins in certain materials. So far, this has been done with magnetic fields, which are not easy to integrate into everyday applications.

In a new set of experiments, an international team of physicists led by Hugo Dil at EPFL have now demonstrated the ability to control what they call “the spin landscape” using electric fields. They accomplished this in a new class of materials based on germanium telluride (GeTe), which is the simplest ferroelectric material operating at room temperature.

The scientists used a technique called spin- and angle-resolved photoemission spectroscopy (SARPES), which can measure the spin of electrons, and has been perfected by Dil’s lab. By combining SARPES with the possibility to apply an electric field, the physicists demonstrate electrostatic spin manipulation in ferroelectric α-GeTe and multiferroic (GeMn)Te.

In addition, the scientists were able to follow the spins’ switching pathway in detail. In (GeMn)Te, the perpendicular spin component switches due to electric-field-induced magnetization reversal. This provides firm evidence of magneto-electric coupling, which opens up the possibility of programmable semiconductor based spintronics.

“Our previous work showed that magnetic fields can control spins in these materials,” says Dil. “And now we’ve shown that spin manipulation is also possible using electric fields. Our experimental findings open up a promising path to only use electric fields in a spintronics device, strongly reducing the energy consumption.”