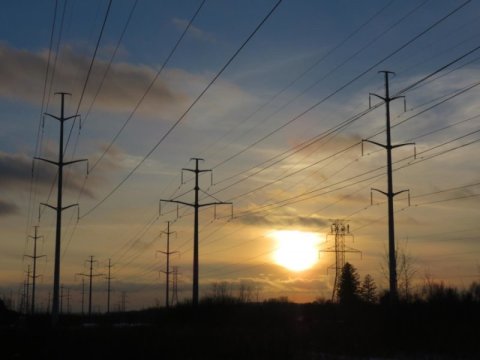 Despite economic woes that could shutter two of Pennsylvania’s nuclear power plants — which generate 6 percent of the state’s power — power prices will remain steady due to low natural gas prices, according to Seth Blumsack, associate professor of energy policy and economics, Penn State.

Owners of both Three Mile Island, near Harrisburg, and Beaver Valley Nuclear Power Station, west of Pittsburgh, have cited financial troubles due to historically low electricity prices. Blumsack said rock-bottom power prices are expected to continue for years to come because energy use has plateaued and efficient natural gas power plants — which are nowhere near peak production — have recently come online. That situation is coupled with extremely low natural gas prices.

“There’s just so much extra generation capacity in this region,” Blumsack said. “These nuclear power plants are big, but even if you were to lose these big power plants there’s so much other generation capacity that can produce electricity at costs competitive with the nuclear plants that the market outcomes aren’t going to change and the reliability of the grid won’t be compromised.”

Blumsack studied the impact of the two nuclear power plants coming offline and found wholesale energy prices would rise between 4-10 percent each year over a three-year period if those plants were not replaced. When that lost nuclear capacity is replaced by natural gas, however, wholesale energy prices decline each year by between 9 percent and 24 percent. The more new generation capacity that enters the market, the larger the reduction in wholesale energy costs as long as market prices for natural gas remain low.

The research will be published in an upcoming issue of The Electricity Journal.

Natural gas prices, which are projected to increase only slightly for the next several years, according to the World Bank Natural Gas Price Forecast, would have to increase by 300 percent at Appalachian trading hubs for nuclear power to again be competitive, Blumsack said. Natural gas prices are now one-fourth the level that they were a decade ago, which helps the economics of natural gas power plants. The growth in renewables, which has higher up-front costs yet lower generation costs, has also made nuclear power less competitive.

“The competition is really fierce and it’s essentially being driven by really low natural gas prices,” Blumsack said. “In inflation-adjusted terms, we haven’t seen natural gas prices this low in decades. There’s so much production potential that it’s tough to think about a scenario that’s going to increase gas prices by more than 50 percent in the next decade.”

Although the two nuclear power plants represent a sizable chunk of the state’s energy portfolio, they represent a much smaller portion of energy for the PJM Interconnection territory, the regional transmission organization that governs the power supply of 13 states and the District of Columbia.

“Overall, electricity demand in the U.S. has not grown in the past decade so you have this combination of no growth in demand and excess power generation capacity,” Blumsack said. “That prompts the market to crash, which causes some players to lose and in this case that appears to be the nuclear power plants.”

Blumsack cautioned that this research focuses solely on energy prices. It doesn’t factor environmental or fuel-security implications that could result from a shift in the energy portfolio. Natural gas is a carbon-based fuel, while nuclear power is carbon-free. Additionally, the two plants employ about 1,700 people. Blumsack said the public costs to retain these facilities would cost about $200,000 for each job preserved.

This research is part of a larger effort among a team at Penn State’s Initiative for Sustainable Electric Power Systems that looks at issues confronting conventional and renewable energy markets as well as how rapidly moving shifts in the electricity market will impact consumers and businesses.

Materials provided by Penn State. Original written by David Kubarek. Note: Content may be edited for style and length.