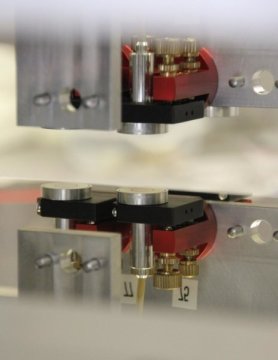 One thing is certain: there’s something out there we don’t yet know. For years now scientists have been looking for “dark matter” or “dark energy” — with our current inventory of particles and forces in nature we just can’t explain major cosmological phenomena, such as why the universe is expanding at an ever faster rate.

New theories for “dark energy” have been suggested. One of the candidates is the so-called “symmetron field,” which is said to pervade space much like the Higgs field. At the TU Vienna researchers have developed an experiment capable of measuring extremely small forces with the help of neutrons. The measurements were taken during a 100-day campaign at the Institut Laue-Langevin, on its PF2 ultra-cold neutron source. They could have provided pointers to the mysterious symmetrons — but the particles didn’t show up. Although this is not the end of the theory, it does at least exclude the possibility of symmetrons existing across a broad range of parameters — and “dark energy” is going to have to be explained differently.

According to Hartmut Abele, the project’s lead scientist, the symmetron theory would be a particularly elegant explanation for dark matter. “We already have proof of the Higgs field, and the symmetron field is very closely related.” However, as with the Higgs particle whose mass was not known until the existence of the particle was confirmed, the physical properties of symmetrons cannot be accurately predicted.

As Abele explains, “nobody can say what the mass of symmetrons is, nor how strongly they interact with normal matter. That’s why it’s so hard to prove their existence experimentally — or their non-existence.” The existence of symmetrons can only be confirmed or refuted within a certain parameter range — symmetrons, in other words, with mass or coupling constants in a specific value range.

Scientists are therefore progressing with caution, from one experiment to the other, testing different parameter ranges. It was already clear that a number of ranges could be excluded. Symmetrons for example with high mass and low coupling constants cannot exist, as they would already have shown up at atomic level. Investigations into the hydrogen atom would have given different results. Similarly, symmetrons in a certain range with very high coupling constants can also be excluded, as they would already have been detected in other experiments using massive pendula.

That said, there was still plenty of scope for admitting the existence of symmetrons, and this is what the team has now investigated in the experiment. A stream of extremely slow neutrons was shot between two mirror surfaces. The neutrons can be found in two different quantum physical states. The energies of these states depend on the forces exerted on the neutron, and this is what makes the neutron such a sensitive force detector. If the force acting on the neutron just above the surface of the mirror is different from the force further up, this would be a strong pointer to the existence of a symmetron field. Mario Pitschmann from TU Vienna, Philippe Brax from the CEA near Paris and Guillaume Pignol from LPSC in Grenoble have calculated the influence of a symmetron field on the neutron. This effect, however, cannot be observed, despite the extreme accuracy of the measurement.

The precision of the energy difference measurement is about 2×10^-15 electron-volts (a figure owes to Gunther Cronenberg’s dissertation). That is the energy required to lift a single electron in the earth’s gravitational field a distance of about 30 micrometres, which is an unimaginably small amount of energy.

The ultra-cold neutrons required for the experiment were generated and delivered by the Institut Laue-Langevin’s PF2 instrument. “With its unrivalled flux of ultra-cold neutrons, PF2 is practically the only instrument out there for this type of high-precision measurement at extremely low count rates,” says Tobias Jenke. Jenke played an important part in the development of the TU Vienna experiment. He is now, together with Peter Geltenbort, responsible for the Institut Laue-Langevin cold neutron source. Austria is a Scientific Member of the Institute and thus has access to its suite of instruments. The experiment is an excellent example of scientific collaboration between Austrian and French researchers.

The Beginning of the End of the Symmetron Theory

For the moment things are not looking too bright for the symmetron theory, although it’s too early to completely exclude their existence. “We have excluded a broad parameter domain: if there were any symmetrons with properties in this domain we would have found them.” To close the remaining loopholes however, science needs even better measurements — or a major discovery providing a completely different solution to the mystery of dark energy.