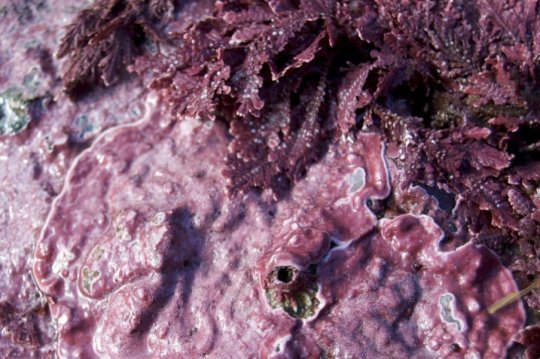 Colorful, hardened algae that dot the ocean floor from Alaska to Mexico often set the tone for which plant and invertebrate species inhabit a given ecological community.

But as rising temperatures change the chemistry of ocean waters, a Florida State University researcher said these almost rock-like organisms called coralline algae are changing too. That could mean a great shift to the overall ecosystem.

“They are almost the canary in the coal mine,” said Assistant Professor of Biological Science Sophie McCoy. “Their interactions with other species make them more valuable than people give them credit.”

McCoy’s research is published in the journal Global Change Biology.

Coralline algae have a hard skeleton and are often pink, red, purple, yellow, or gray-green. Most people wading in the sea barely notice the algae, but they release chemical cues that tell invertebrates or plant species whether the environment is hospitable.

If the algae alter in some way or even disappear, the cues for a given ecological community would change in turn. McCoy’s study examined how ocean acidification affects three common types of coralline algae found in the waters off of Tatoosh Island in Washington. With rising global temperatures and more carbon dioxide in the atmosphere, ocean waters have become more acidic.

Though all three types of algae are growing at the same rate they have in the past, there are some significant changes.

Of the three types of algae, one — Pseudolithophyllum whidbeyense — showed extensive changes over the past few decades as the sea water acidified. Its skeleton had more magnesium in it than calcium carbonate, meaning it was significantly weaker. The weaker the skeleton, the more likely it is to dissolve or be eaten by snails. The other two types of algae were able to maintain their skeletal integrity, but were slightly smaller in size than samples from past decades.

Historical samples from 1980-2010 were almost uniform in size and skeletal integrity, McCoy said.

“What we’re seeing is how individual types react in different ways when stressed,” McCoy said. “That is something to consider in the climate change research overall — some species of plants and animals may go away and others could flourish.”

McCoy will now turn her attention to the relationship between the coralline algae and snails or other grazers to see if the grazers are experiencing changes in behavior or physical changes to their teeth and bite wounds.

Her co-author on the study is Nicholas Kamenos from University of Glasgow.