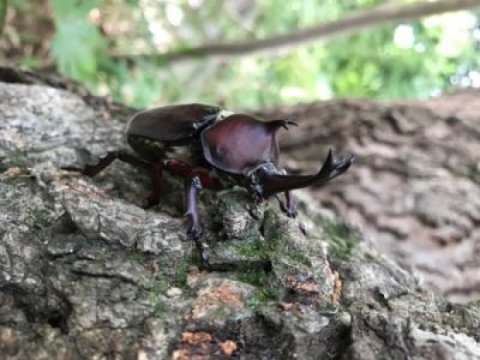 Horns have evolved independently multiple times in scarab beetles, but distantly related species have made use of the same genetic toolkit to grow these prominent structures, according to a study publishing October 4, 2018 in the open-access journal PLOS Genetics by Teruyuki Niimi at the National Institute for Basic Biology in Okazaki, Japan, and colleagues.

There are over 35,000 species of scarab beetle (Scarabaeidae), and many scarab beetles grow horns on the head and/or upper body. Horns are considered to be independent radiation in rhinoceros beetles and their distant relatives dung beetles. Rhinoceros beetles include some of the largest insect species on earth, such as the famous Atlas and Hercules beetles. To investigate the genetic mechanisms that control horn development in these distant groups, the team examined gene expression and function in early horn cells in developing larvae of the Japanese rhinoceros beetle (Trypoxylus dichotomus), and compared this with published data for dung beetles.

From the high-throughput sequence analysis, they identified 49 genes that indicated possible involvement in horn development of the rhinoceros beetle, and used RNA interference to deactivate each gene to measure the effect on adult horn size and shape. Eleven genes expressed during larval development showed measureable effects on horn formation in the rhinoceros beetle. They found that these eleven genes include head and appendage patterning genes, and the same category of genes have also been linked to horn development in dung beetles. The results suggest that (1) horns developmentally derive from the similar head regions, and that (2) the same set of ancestral genes were co-opted repeatedly in distinctly originated horns between rhinoceros and dung beetles. This study reveals deep parallels in development between independently evolved horns, but it is also possible that the ancestor of the Scarabaeidae family had horns that were subsequently lost in the evolution of the majority of modern scarab beetles. A wider taxon-sampling is required to clarify whether horns originate single or multiple times, and this study provides a promising way to discover horn formation genes in a species.