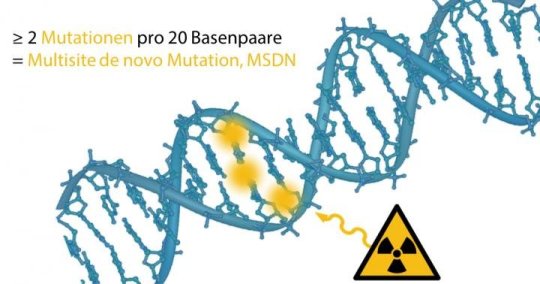 The offspring of radar soldiers exposed to high doses of radiation during their service experience more genetic alterations than families without radiation exposure. This has been demonstrated in a pilot study by the research team involving Charité-Universitätsmedizin Berlin, the Berlin Institute of Health (BIH), the Max Delbrück Centre for Molecular Medicine, Radboud University Nijmegen (Netherlands) and the University Hospital Bonn, which has now been published in the journal Scientific Reports. The results of this pilot study will be reviewed in a larger scale study.

Until the 1980s, military radar systems were often inadequately shielded against spurious radiation emitted by radar amplifier tubes. Such rays can cause radiation damage to service and maintenance personnel. The persons involved have joined forces in the ‘Association for the support of persons harmed by radar beams’. In 2003, a commission of experts made recommendations on compensatory payments. Since some children of former radar soldiers suffer from physical disabilities attributed to the radiation exposure of their fathers, their offspring are now in the spotlight. Whether radiation led to genotype damage in these children is debated.

A research team from Charité-Universitätsmedizin Berlin, the Berlin Institute of Health (BIH), the Max Delbrück Center for Molecular Medicine, Radboud University Nijmegen (Netherlands) and the University Hospital Bonn have now investigated this question in a pilot study. ‘Through the latest methods of high-throughput sequencing, the complete genomes of parents and their children can now be studied within a short time. This allows us to determine the mutation rates after radiation exposure much more accurately than before’ says first author Dr. med. Manuel Holtgrewe of the Core Unit Bioinformatics (CUBI) of the Berlin Institute of Health (BIH) and Charité-Universitätsmedizin Berlin.

The scientists studied the genomes of twelve families of radar soldiers. The entire genomes of 18 offspring and their parents were sequenced. The exact radiation exposure of the soldiers cannot be determined retroactively. Researchers estimate, however, that a ‘high dose’ of radiation emanated from the radar systems, especially because radar soldiers very frequently became ill, many from cancer. Scientists compared the mutation rates in the genomes of radar soldier families with that of 28 offspring of parents who were not exposed to radiation.

The focus was on so-called ‘multisite de novo mutations’ (MSDN), which have already been demonstrated in mice because of radiation. An MSDN is present when two or more defects in DNA strands occur adjacently to each other in a line of 20 base pairs. While in the families without radiation exposure, only every fifth offspring had an MSDN, in the radar soldier families this was two out of three offspring. Twelve MSDNs were found in the 18 offspring of radar soldiers, in one family indeed six MSDNs in three offspring. In addition, in two offspring, chromosomal alterations were also detected that had serious clinical consequences. The origin of these mutations could also be traced back to the paternal germ line and only rarely occurs by chance.

‘The results of our pilot study suggest that an accumulation of certain genotype damage by radiation can basically be demonstrated in the next generation,’ says Prof. Dr. med. Peter Krawitz from the Institute for Genomic Statistics and Bioinformatics at the University Hospital Bonn. How pronounced the accumulation of genotype damage by radiation is must be demonstrated by even larger studies, the results of which rely on a much broader database. A team involving Krawitz is currently planning such a follow-up study together with the Institute of Human Genetics of the University Hospital Bonn, the Charité-Universitätsmedizin Berlin and the Berlin Institute of Health (BIH), who are funding it.

The researchers thank the Government Organisation in Support of Radar Victims (BzUR) and its members for supporting the current study. The investigation was facilitated by a private donation of 50,000 euros by Dr. Gisela Sperling.