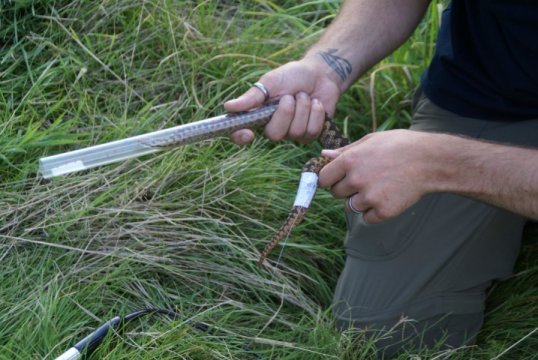 A pioneering study by the University of Kent on the effects of relocating adders due to development has found that males will disperse from their release site — with one even going so far as to return to his original home.

All native reptiles are protected by law, which means that animals found to be present on sites scheduled for development are often moved to alternative habitats. Reptiles are frequently the targets of these translocations but there is little information on their fate or how their behaviour compares to individual animals that are left where they are.

For the study, researchers Darryn Nash and Professor Richard Griffiths from Kent’s Durrell Institute of Conservation and Ecology, tracked adders (Vipera berus) translocated from a development site in Essex (UK) in 2014.

Some of the snakes were fitted with external radio tags and tracked for a period of 10 days during the spring and summer. The movements of the translocated adders were compared to those of ‘resident’ snakes already present at the release site.

One of the males even returned to the site from which it had been moved, a distance of over half a kilometer which involved crossing large areas of unsuitable short grassland habitat. This could have exposed the snake to predators.

Furthermore, the research also showed a significant difference between how male and female adders reacted to being moved. Translocated males had significantly larger total ranges of movement than resident animals. In contrast, all translocated females remained within 50 m of the point of release.

Professor Griffiths said: “It is clear that moving adders due to development is not as helpful to their conservation as people think. Our research suggests the dispersal of male snakes from the release site may increase the risk of mortality of snakes that have been moved from development sites and reduces the likelihood of establishing a new population. It may be time for a new approach. Encouraging the establishment of new home ranges within the boundaries of release sites may need mechanisms to prevent dispersal immediately following release.”