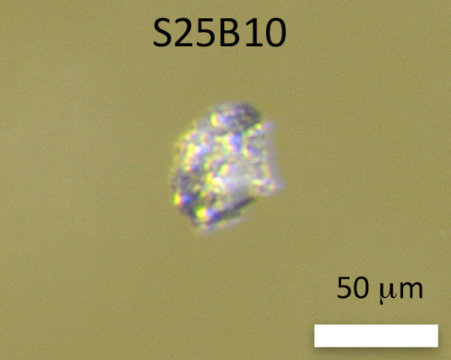 The early surface of Mars consisting of a liquid magma ocean crystallized extremely rapidly, just 20 million year after the formation of the solar system. Thereafter, a solid crust emerged on the red planet potentially housing oceans with water and life. This was about 130 million years before a corresponding solid crust appeared on Earth. New evidence for this rapid crystallization and crust formation on Mars has just been published in a study from the Centre for Star and Planet Formation at the Natural History Museum of Denmark, University of Copenhagen. The study, based on the analysis of the rare Mars meteorite Black Beauty, significantly expands the window for when life might have existed on Mars.

Crust formation is an important step in the development of terrestrial planets, and what makes Black Beauty special and expensive is that it contains small pieces of the crust from Mars. More precisely, Black Beauty contains the rare mineral zircon, in which researchers have found a high concentration of hafnium.

“Zircon is a very robust mineral that is ideally suited to provide absolute ages. In this context, the zircons can be used to establish a temporal framework to understand the formation history of the Martian crust,” says Professor Martin Bizzarro. “Zircon also acts as a small time capsule as it preserves information about the environment where and when it was created. In this case, a time capsule with hafnium that originates from the earliest crust of Mars, which was present approximately 100 million years before the oldest zircon of Black Beauty was created. Thus, Mars got an early start compared to Earth, whose solid crust wasn’t formed until much later.”

However, it required a certain amount of courage to reach this result.

We crushed the meteorite

The original 319.8 grams heavy meteorite Black Beauty was found in the Sahara Desert in 2011. It soon became apparent that the meteorite was something special and it currently has a sales price of approximately $10,000 per gram. A year ago, Professor Martin Bizzarro managed to acquire 44 grams of Black Beauty with help from various funding agencies and exchange of meteorites from the museum’s collection.

“One of the big challenges has been that the zircons in Black Beauty are extremely small. This called for a courageous strategy: We crushed our precious meteorite. Or to be precise: We crushed 5 grams,” says Martin Bizzarro. “Today, I’m glad we chose that strategy. It released seven zircons, one of which is the oldest known zircon from Mars. And from the zircons and their content of hafnium, we can now conclude that the crystallization of the surface of Mars went extremely fast: already 20 million years after the formation of the solar system, Mars had a solid crust that could potentially could house oceans and perhaps also life.”

Materials provided by University of Copenhagen. Note: Content may be edited for style and length.