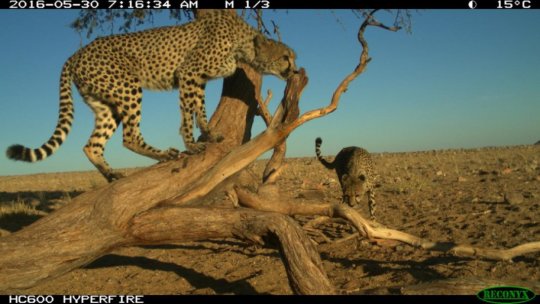 Scientists of the Leibniz Institute for Zoo and Wildlife Research (Leibniz IZW) in Berlin analysed the spatial behaviour of cheetahs. They showed that male cheetahs operate two space use tactics which are associated with different life-history stages. This long-term study on movement data of over 160 free-ranging cheetahs in Namibia has now been published in the scientific journal ECOSPHERE.

Cheetahs are the rarest of the larger cat species in Africa. The researchers demonstrated that cheetah males in Africa display two spatial tactics: floaters roam over vast areas whereas territory holders mark and defend small areas. Females use home ranges with sizes between those of territory holders and floaters. Cheetahs therefore require huge natural areas, with limited human interference. The recent findings on their spatial behaviour can help to develop improved conservation measures for these highly specialized cats.

Mammals have evolved numerous social systems. These range from a solitary life to highly complex social systems, where a group may contain many males and females. Cheetahs do not fit into any of the social systems described so far. Their social organisation has been a topic of controversy. A research group of the Leibniz-IZW has now succeeded in solving this riddle.

Male cheetahs live solitarily or in small groups of two or three males (coalitions), whereas females are usually solitary — unless they are accompanied by their cubs. In southern Africa, cheetahs often live outside protected areas and frequently come into conflict with cattle farmers. “These conflicts have led to cheetahs becoming shy creatures, thus it is nearly impossible to observe them directly. We therefore fitted the cheetahs with GPS collars for our study,” explains Bettina Wachter, head of the project at the Leibniz-IZW.

The researchers equipped 164 cheetah males and females with GPS collars. The result: mature adult males either roam over vast areas of up to 1,600 km2 or defend small territories of approximately 380 km2. Females use medium-sized home ranges of approximately 650 km2. “As territory holders, single males or coalitions of males scent-mark prominent landmarks such as large trees or termite mounds inside their territory with urine or faeces. Single or coalitions of non-territorial males roam around and visit and sniff these marking sites in order to collect information about the territory holders,” says Jörg Melzheimer, lead author of the study and spatial ecologist at the Leibniz-IZW.

Sooner or later the single or male coalitions of non-territorial floaters try to take over a territory. They will only succeed if their group size is larger than that of the territory holder(s). These takeovers often end with the death of one side or the other. Once the floater(s) take over a territory, their body weight rapidly increases within a few months. “Their high willingness to take risks when attempting to take over a small territory indicates that territories contain important resources. We assume that holding a territory increases the chance to encounter females, because they regularly visit the marking sites inside several different territories,” Wachter explains. Floating and territory holding are therefore associated with different life-history stages — adult males become first floaters before they may succeed to obtain a territory. As in real life, not all floaters have the opportunity to obtain a territory but if they do so, then they are often males of a more mature age.

“Understanding the social system of cheetahs is not only of academic interest. We can use information on the spatial movements of males and females, how and where they encounter each other and where they are most abundant to minimize the conflicts between farmers and cheetahs,” explains Melzheimer.