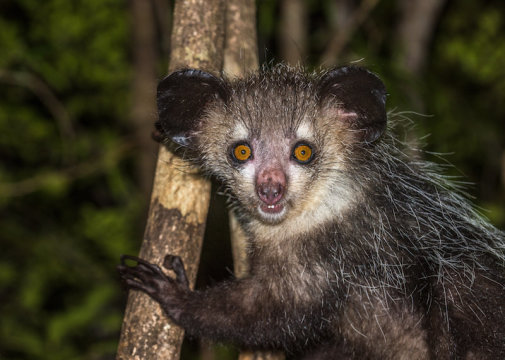 The world’s weirdest little primate has gotten even weirder, thanks to the discovery of a tiny extra digit. A study led by researchers from North Carolina State University has found that aye-ayes possess small “pseudothumbs” — complete with their own fingerprints — that may help them grip objects and branches as they move through trees. This is the first accessory digit ever found in a primate.

Aye-ayes are unusual animals from the get-go: these extremely rare lemurs are known for their constantly growing incisors, large ears, and strange hands — particularly for the slender, elongated middle fingers that they use for locating and spearing grubs inside trees.

“The aye-aye has the craziest hand of any primate,” says Adam Hartstone-Rose, associate professor of biological sciences at NC State and lead author of a paper describing the work. “Their fingers have evolved to be extremely specialized — so specialized, in fact, that they aren’t much help when it comes to moving through trees. When you watch them move, it looks like a strange lemur walking on spiders.”

Hartstone-Rose and NC State post-doctoral researcher Edwin Dickinson were studying the tendons that lead to the aye-aye’s unusual hands when they noticed that one of the tendons branched off toward a small structure on the wrist. Using traditional dissection digital imaging techniques on six aye-ayes, the researchers found that the structure in question is composed of both bone and cartilage, and has musculature that allows it to move in three directions — much the same way that human thumbs move.

“Using these digital techniques allows us to visualize these structures in three dimensions, and to understand the organization of the muscles which provide movement to the digit,” says Dickinson, who built the digital model of the anatomy and is co-first author of the paper.

“The pseudothumb is definitely more than just a nub,” Hartstone-Rose says. “It has both a bone and cartilaginous extension and three distinct muscles that move it. The pseudothumb can wriggle in space and exert an amount of force equivalent to almost half the aye-aye’s body weight. So it would be quite useful for gripping.”

The team examined aye-aye specimens from both sexes, ranging in age from juvenile to adult, and found the same structure in both the left and right hands of each one.

According to Hartstone-Rose and Dickinson, the aye-aye may have developed the pseudothumb to compensate for its other, overspecialized fingers.

“Other species, like the panda bear, have developed the same extra digit to aid in gripping because the standard bear paw is too generalized to allow the dexterity necessary for grasping,” Hartstone-Rose says. “And moles and some extinct swimming reptiles have added extra digits to widen the hand for more efficient digging or swimming. In this case, the aye-aye’s hand is so specialized for foraging an extra digit for mobility became necessary.

“Some other primate species have reduced digits to aid in locomotion. The aye-aye is the first primate to dial digits up in the hand rather than dial them down. And it’s amazing that it’s been there the whole time, in this strangest of all primates, but no one has noticed it until now.”

The research appears in the American Journal of Physical Anthropology and is supported by the National Science Foundation under grants IOS-15-57125 and BCS-14-40599. Co-authors Anthony Herrel of the Muséum national d’Histoire naturelle in Paris and former NC State lab manager Marissa Boettcher contributed to the work.