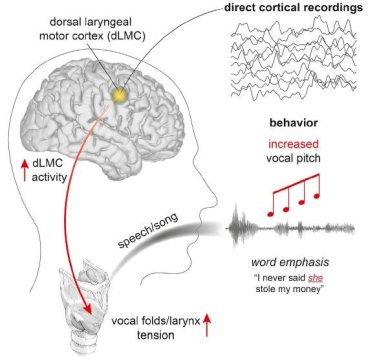 Among primates, humans are uniquely able to consciously control the pitch of their voices, making it possible to hit high notes in singing or stress a word in a sentence to convey meaning. On June 28 in the journal Cell, researchers at the University of California, San Francisco narrow in on a region of the brain’s frontal lobe that controls the “voice box” muscles that are responsible for vocal pitch.

“Our overall goal is to understand how the brain allows us to communicate through speech and language. In this particular study, we wanted to pin down how neural activity controls vocal pitch in the larynx when we talk,” says senior author Edward Chang, a neurosurgeon at the University of California, San Francisco. “It might have implications for understanding how humans evolved the ability to speak.”

Chang and his colleagues examined a region of the brain called the bilateral dorsal laryngeal motor cortex (dLMC), which is known to lie between the regions controlling the hand and mouth. They asked twelve participants to repeatedly speak the sentence, “I never said she stole my money,” changing the pitch of different words every time to convey exclamations, accusations, or queries. And as each emphasized word was uttered, the researchers saw increased activity in the dLMC, suggesting that it was linked to the change in vocal pitch.

The researchers worked closely with patient volunteers, who underwent temporary implantation of brain sensors for the treatment of epileptic seizures. “Participating in the research during treatment does not change their medical care, and it’s something that’s completely voluntary,” says Chang, “and this was a unique opportunity to understand what’s going on in the brain at high resolution, on the order of millimeters and milliseconds.”

When the researchers also probed neurons in the dLMC with small electrical currents as part of brain-mapping procedures, they could evoke movement of the muscles in the larynx, as well as generate vocalizations as a direct result of the artificial stimulation. This allowed them to demonstrate causality for the role of dLMC in vocalizations. “Further, within this laryngeal control area, we found specific subareas corresponding to specific larynx muscles and functions, which was very unexpected,” he says.

One next step will be to investigate the way the dLMC’s control of vocal pitch functions in languages other than English, especially tonal languages like Mandarin Chinese in which vocal pitch patterns are used differently.

Chang’s research findings to publish in Cell complement those his group reported May 17 in the journal Neuron, describing the neural control for the dynamic coordination of humans’ lip, tongue, jaw, and throat muscles required for fluent, articulate speech. “These two studies combined give us a much more complete understanding of how the human cerebral cortex enables us to speak in real time,” Chang says.