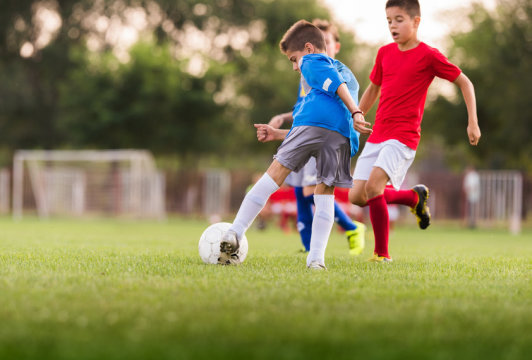 Competitive team games in which men test their mettle against others are universal across the world, and may have deep roots in our evolutionary past. Among hunter-gatherers, these games enable men to hone their physical skills and stamina, assess the commitment of their team members, and see how each performs under pressure. All these activities suggest motivation to practise skills involved in lethal raiding, says Michelle Scalise Sugiyama of the University of Oregon in the US, lead author of a study in Springer’s journal Human Nature.

Play behavior in humans and other animals is thought to have evolved as a way to develop, rehearse, and refine skills that are critical for survival or reproduction. Chase games, for instance, build stamina and speed, which is helpful for evading predators. Similarly, play fighting is believed to develop skills used in actual fighting. Although many animals play fight, only people do so in teams. The study’s findings suggest that team play fighting is not a recent invention of agricultural societies.

For the purposes of this study, Scalise Sugiyama and her colleagues researched how widespread indigenous forms of coalitional play fighting were among hunter-gatherer societies, and whether these games rehearse motor skills used in lethal raiding. This type of play involves the use of coordinated action and non-lethal physical force by two opposing teams, each of which attempts to attain a predetermined physical objective, such as scoring a goal, while preventing their opponents from doing the same.

Activities using sticks to hit objects (and sometimes people) were the most common game type, followed by games involving kicking and games similar to rugby. The researchers also found many instances of activities involving running, grappling, parrying and throwing. These physical skills mirror those used by hunter-gatherers when raiding other groups. Scalise Sugiyama says that coalitional play fighting may have served as a practice ground for learning how to coordinate striking, blocking, kicking, dodging and projectile-throwing maneuvers amongst coalition members, all in an effort to increase the chances of success and reduce the chances of injury during potentially lethal raids.

“Interestingly, mock warfare was found in 39 per cent of culture clusters and boys’ mock warfare in 26 per cent. This suggests that motivation to engage in coalitional play fighting emerges in childhood,” says Scalise Sugiyama.

The safe confines of a game did not only have physical benefits but provided an opportunity to work as a team. Men learned to anticipate, monitor and strategically respond to the actions of their opponents, and continuously assess situations as both sides tired or lost combatants.

“Periodic participation in such games during childhood, adolescence, and early to middle adulthood provides individuals with opportunities to viscerally assess the aggressive formidability and commitment of their own and — when played with neighboring groups — other coalitions as their composition and skills change through time,” explains Scalise Sugiyama. “The widespread evidence for such games among hunter-gather societies suggests that the motivation to engage in them is a universal feature of human psychology, generating behavior that develops, rehearses, and refines the coalitional combat skills used in lethal raiding.”