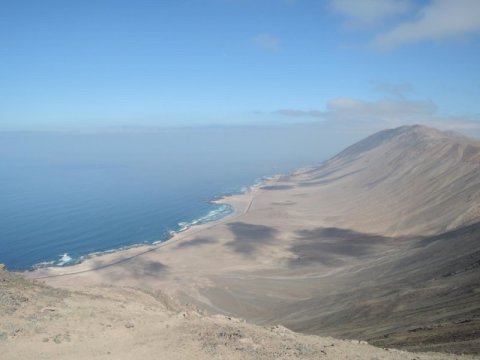 Using a single seismometer, researchers have shown that  seismic waves excited by the surf, together with the effect of the Earth’s tides on the subsoil, can be used to better understand the properties of the Earth without having to drill into the ground. Knowledge of subsurface stress or strain fluctuations is important for safety in construction and mining, and monitoring geological processes in volcanoes and fault zones, for example.

Anyone who wants to take a look inside the Earth needs a signal that can penetrate rocks, minerals and other opaque material. Seismic waves represent such a signal. If you record them with a seismometer, you can draw conclusions from the recorded data about the state of the subsurface through which the waves have passed. Knowledge of subsurface stress or strain fluctuations is just as important for safety in construction and mining, for example, as it is for monitoring geological processes in volcanoes and fault zones. Now Christoph Sens-Schönfelder from the GFZ German Research Centre for Geosciences in Potsdam and Tom Eulenfeld from the University of Jena have been able to show that the seismic waves excited by the surf, together with the effect of the Earth’s tides on the subsoil, can be used to better understand the properties of the Earth.

Seismic waves not only provide information about the structure of the Earth’s material, but also about the forces acting on it. For example, deformations of the subsurface change the velocity at which a wave travels. In order to draw conclusions about the subsurface forces from the velocity, however, data is required on how the material reacts to deformations under known conditions. Until now, such data have only been available from laboratory experiments, not from the field.

Christoph Sens-Schönfelder and Tom Eulenfeld have now succeeded for the first time in using a single seismometer to measure how sensitively seismic waves react to the deformation of the Earth’s material they propagate in. In order to achieve that, they evaluated the velocity of the seismic noise generated by the surf. They report on this in the journal Physical Review Letters.

Measuring deformations in the Earth’s interior from the surface

“We use two different signals that the environment provides us with naturally,” explains Christoph Sens-Schönfelder. “Due to the tidal effect of the moon and the sun, the universe conducts a permanent deformation experiment with the Earth. The luminaries pull with great regularity on our planet. To observe this pulling, we use the seismic noise in the underground that is generated by the surf.”

The relation investigated by Christoph Sens-Schönfelder and Tom Eulenfeld allows in principle a measurement of the deformations inside the Earth by means of recordings of seismographs on the Earth’s surface. And that without having to drill into the ground.

The data that the two researchers investigated was recorded by the Integrated Plate Boundary Observatory in the Atacama Desert in northern Chile. Improved software was needed to detect even the slightest changes in wave velocity and to combine these changes with the deformation of the subsurface by the tides. Since this tidal deformation is known with high accuracy, it is possible to characterize the subsurface more comprehensively than before.