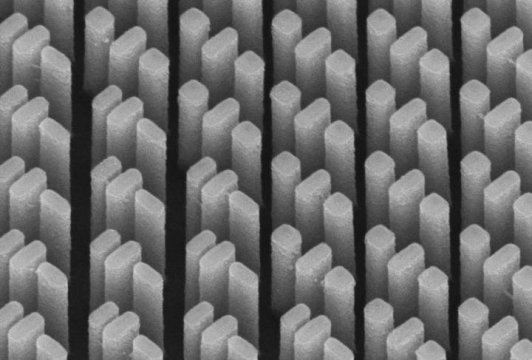 Today’s optical systems — from smartphone cameras to cutting-edge microscopes — use technology that hasn’t changed much since the mid-1700s. Compound lenses, invented around 1730, correct the chromatic aberrations that cause lenses to focus different wavelengths of light in different spots. While effective, these multi-material lenses are bulky, expensive, and require precision polishing or molding and very careful optical alignment. Now, a group of researchers at the Harvard John A. Paulson School of Engineering and Applied Sciences (SEAS) is asking: Isn’t it time for an upgrade?

SEAS researchers have developed a so-called metacorrector, a single-layer surface of nanostructures that can correct chromatic aberrations across the visible spectrum and can be incorporated into commercial optical systems, from simple lenses to high-end microscopes. The metacorrector eliminated chromatic aberrations in a commercial lens across the entire visible light spectrum. The device also works for the super-complex objectives with as many as 14 conventional lenses, used in high-resolution microscopes.

The research is described in Nano Letters.

“Our metacorrector technology can work in tandem with traditional refractive optical components to improve performance while significantly reducing the complexity and footprint of the system, for a wide range of high-volume applications” said Federico Capasso, the Robert L. Wallace Professor of Applied Physics and Vinton Hayes Senior Research Fellow in Electrical Engineering at SEAS and senior author of the paper.

In previous research, Capasso and his team demonstrated that metasurfaces, arrays of nanopillars spaced less than a wavelength apart, can be used to manipulate the phase, amplitude and polarization of light and enable new, ultra-compact optical devices, including flat lenses. This research uses the same principles to tune and control the effective refractive index of each nanopillar so that all wavelengths are brought by the metacorrector to the same focal point.

“You can imagine light as different packets being delivered at different speeds as it propagates in the nanopillars. We have designed the nanopillars so that all these packets arrive at the focal spot at the same time and with the same temporal width,” said Wei Ting Chen, a Research Associate in Applied Physics at SEAS and first author of the paper.

“Using metacorrectors is fundamentally different from conventional methods of aberration correction, such as cascading refractive optical components or using diffractive elements, since it involves nanostructure engineering,” said Alexander Zhu, a graduate student at SEAS and co-author of the study. “This means we can go beyond the material limitations of lenses and have much better performances.”

Next, the researchers aim to increase efficiency for high-end and miniature optical devices.

Harvard’s Office of Technology Development has protected the intellectual property relating to this project and is exploring commercialization opportunities.

Materials provided by Harvard John A. Paulson School of Engineering and Applied Sciences. Original written by Leah Burrows. Note: Content may be edited for style and length.