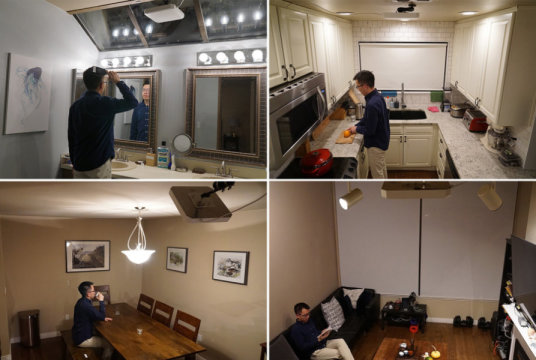 Frying pans, pill bottles, yoga mats, coffee cups and countless other nonelectronic objects could be turned into a network of Internet of Things sensors with a new RFID-based technology from the University of Michigan.

The system, called IDAct, bridges the gap between the estimated 14.2 billion “smart” electronic devices that are currently part of the Internet of Things and the hundreds of billions of everyday nonsmart objects left out of the picture.

“Imagine a world where your pill bottle keeps track of your medication intake and a water glass monitors your hydration level,” said Alanson Sample, associate professor of electrical engineering and computer science and an author on a paper presented recently at the IEEE RFID Conference in Phoenix. “Even your yoga mat is aware of your exercises and could adjust lighting, temperature and background music accordingly.”

The technology could also have applications in elder care, where it could be used to unobtrusively monitor medications and daily activities, helping seniors stay independent longer without the need for expensive and invasive live-in care.

Using RFID readers and battery-free RFID tags that cost only a few cents, IDAct can sense the presence and movement of people in a room and detect the movement of objects with enough detail to determine, for example, whether you’ve moved a pill bottle or cooked a meal. The tags can be attached to nearly any object in the form of a sticker, and RFID readers can be integrated into everyday objects like light bulbs.

“Given the ubiquity of these objects, there are significant opportunities in enhancing their sensing capabilities and creating interactive applications around them,” said Hanchuan Li, a former graduate researcher in computer science and engineering at the University of Washington and lead author on the paper.

The technology accurately detected specific activities more than 96 percent of the time in a recent study.

“You could imagine assistive tools that could help the elderly stay in their own homes longer by monitoring their daily activities with this technology,” Sample said. “It could detect changes in eating, sleeping or medication, for example, before the situation deteriorates and they end up in the emergency room.”

RFID tags have been used for years to track objects in applications like shipping and theft prevention. The tags absorb just enough electromagnetic energy from the reader’s signal to broadcast a simple, unique code. In the past, the reader simply picked up this code to identify whether the object was present or not — on or off, signal or no signal.

IDAct improves on this by providing a more nuanced reading of the signal from the RFID tags. It can detect minute fluctuations in the signal coming back from tags to detect when an object is moved or whether a person is touching it. It can also detect changes in a room’s electromagnetic field to infer, for example, when a human is present.

“Every object causes electromagnetic interference in a specific way,” Sample said. “We can use that information, along with information from RFID tags, to get a very detailed picture of what’s going on in a given space.”

These improved signals are then analyzed by a machine learning algorithm run by an onsite computer to infer what’s happening in a room. In the testing phase, this processing was done on a laptop, but Sample envisions that the necessary hardware eventually will be integrated into the RFID reader itself.

The team tested the technology by outfitting a volunteer’s apartment with a series of RFID readers and then tagging household objects with RFID tags. They collected 26 hours of data from each room while users were present, and also collected two hours of data from empty rooms as a control.

The team now plans to look for industry partners that could build out the technology for use in elder care settings. Sample and Li developed the technology with Shwetak Patel at the University of Washington and Chieh-yih Wan and Raul Shal of Intel Corp.

The paper is titled “IDAct: Towards Unobtrusive Recognition of User Presence and Daily Activities.” The research was supported by Intel Labs.