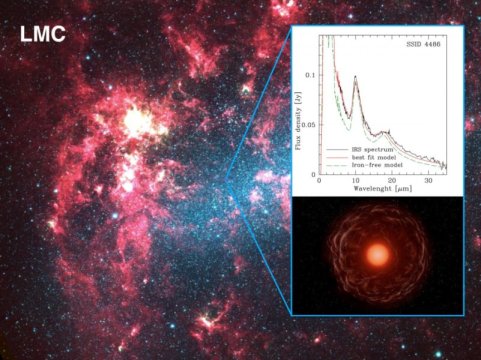 The Instituto de Astrofísica de Canarias (IAC) has participated in a study which has discovered a group of stars very poor in metals and shrouded in a high fraction of iron dust, situated in the Large Magellanic Cloud. This work has used a combination of theoretical models of the formation of dust in circumstellar envelopes with infrared observations taken with the Spitzer Space Telescope. The work includes predictions for the future James Webb Space Telescope.

Stars with masses between one and eight times the mass of the Sun evolve along the asymptotic giant branch (AGB) before ending their lives as white dwarfs. It is during this rapid but crucial phase when the stars expand to huge dimensions and cool down, losing a major fraction of their mass due to the strong stellar winds. The low temperature and high density of the winds provide ideal conditions for the condensation of dust grains in their circumstellar envelopes.

The dust produced by the stars in their AGB phase and expelled into the interstellar medium is important for the lives of the galaxies, because this is an essential component for the formation of new stars, and also of planets. That is why characterising the type of dust (solid state organic components, or inorganic components) and the quantity of dust produced by these giant stars is very interesting to the astronomical community.

The journal The Astrophysical Journal Letters today is publishing a study which has answers to the puzzles of a peculiar group of massive AGB stars situated in the Large Magellanic Cloud. Comparing the infrared observations made with the Spitzer Space Telescope (and predictions for the future James Webb Space Telescope) with the theoretical models developed by this group, they have discovered that these stars have masses around 5 solar masses, were formed around 100 million years ago, and are poor in metals (such as iron, magnesium and silicon). Unexpectedly they have discovered that the infrared spectral energy distributions can be reproduced only if iron dust is the principal dust component of their circumstellar envelopes. This is uncommon around massive AGB stars. Before it was known that they mainly produced silicates, large quantities of dust rich in oxygen and silicon, as well as magnesium. But this finding is even more surprising if we consider the metal poor environment of the stars under study.

We have characterized for the first time this class of stars with unique spectral properties. The low metallicity of these giant stars is the essential ingredient which gives peculiar conditions permitting the formation of large quantities of iron dust” explains Ester Marini, the first author of the article and a doctoral student at the Roma Tre University. She adds “In fact, in metal poor environments the complex nucleosynthesis within massive AGB stars is so advanced that it burns up almost all the magnesium and oxygen, necessary to form other types of dust, such as the silicates.”

Under these particular conditions iron dust becomes the main component of the dust formed by these stars. “This result is an important confirmation of the theory of iron dust in metal poor environments, already hinted at in independent observational evidence” says the IAC researcher Aníbal García Hernández, a co-author of the work, and one of the initiators of the fruitful collaboration between the IAC and the Osservatorio Astronomico di Roma (OAR-INAF) on these type of giant AGB stars.

“The arrival of the James Webb Space Telescope (JWST) will open up new possibilities for investigating this case in depth,” comments Flavia Dell’Agli, a postdoctoral researcher at the IAC, and second author of the article. She adds “That future telescope will greatly enhance the number of resolved extragalactic AGB stars” and that the MIRI instrument on the JWST will be “ideal for identifying this class of stars in other galaxies of the Local Group.”