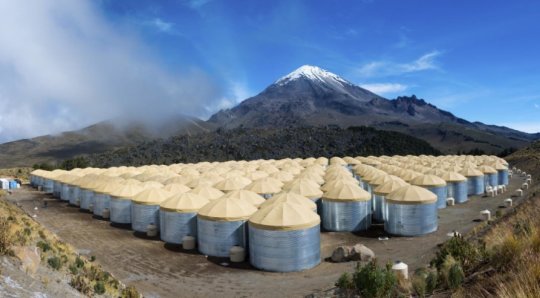 The night sky seems serene, but telescopes tell us that the universe is filled with collisions and explosions. Distant, violent events signal their presence by spewing light and particles in all directions. When these messengers reach Earth, scientists can use them to map out the action-packed sky, helping to better understand the volatile processes happening deep within space.

For the first time, an international collaboration of scientists has detected highly energetic light coming from the outermost regions of an unusual star system within our own galaxy. The source is a microquasar — a black hole that gobbles up stuff from a nearby companion star and blasts out two powerful jets of material. The team’s observations, described in the October 4, 2018 issue of the journal Nature, strongly suggest that electron acceleration and collisions at the ends of the microquasar’s jets produced the powerful gamma rays. Scientists think that studying messengers from this microquasar may offer a glimpse into more extreme events happening at the centers of distant galaxies.

The team gathered data from the High-Altitude Water Cherenkov Gamma-Ray Observatory (HAWC), which is a detector designed to look at gamma-ray emission coming from astronomical objects such as supernova remnants, quasars and rotating dense stars called pulsars. Now, the team has studied one of the most well-known microquasars, named SS 433, which is about 15,000 light years away from Earth. Scientists have seen about a dozen microquasars in our galaxy and only a couple of them appear to emit high-energy gamma rays. With SS 433’s close proximity and orientation, scientists have a rare opportunity to observe extraordinary astrophysics.

“SS 433 is right in our neighborhood and so, using HAWC’s unique wide field of view, we were able to resolve both microquasar particle acceleration sites,” said Jordan Goodman, a Distinguished University Professor at the University of Maryland and U.S. lead investigator and spokesperson for the HAWC collaboration. “By combining our observations with multi-wavelength and multi-messenger data from other telescopes, we can improve our understanding of particle acceleration in SS 433 and its giant, extragalactic cousins, called quasars.”

Quasars are massive black holes that suck in material from the centers of galaxies, rather than feeding on a single star. They actively expel radiation, which can been seen from across the universe. But they are so far away that most known quasars have been detected because their jets are aimed at Earth — like having a flashlight aimed directly at one’s eyes. In contrast, SS 433’s jets are oriented away from Earth and HAWC has detected similarly energetic light coming from the microquasar’s side.

Regardless of where they originate, gamma rays travel in a straight line to their destination. The ones that arrive at Earth collide with molecules in the atmosphere, creating new particles and lower-energy gamma rays. Each new particle then smashes into more stuff, creating a particle shower as the signal cascades toward the ground.

HAWC, located roughly 13,500 feet above sea level near the Sierra Negra volcano in Mexico, is perfectly situated to catch the fast-moving rain of particles. The detector is composed of more than 300 tanks of water, each of which is about 24 feet in diameter. When the particles strike the water they are moving fast enough to produce a shock wave of blue light called Cherenkov radiation. Special cameras in the tanks detect this light, allowing scientists to determine the origin story of the gamma rays.

The HAWC collaboration examined 1,017 days’ worth of data and saw evidence that gamma rays were coming from the ends of the microquasar’s jets, rather than the central part of the star system. Based on their analysis, the researchers concluded that electrons in the jets attain energies that are about a thousand times higher than can be achieved using earthbound particle accelerators, such as the city-sized Large Hadron Collider, located along the border between France and Switzerland. The jets’ electrons collide with the low-energy microwave background radiation that permeates space, resulting in gamma ray emission. This is a new mechanism for generating high-energy gamma rays in this type of system and is different than what scientists have observed when an object’s jets are aimed at Earth.

Ke Fang, a co-author of the study and former postdoctoral researcher at the Joint Space-Science Institute, a partnership between UMD and NASA’s Goddard Space Flight Center, said that this new measurement is critical to understanding what is going on in SS 433.

“Looking at only one kind of light coming from SS 433 is like seeing only the tail of an animal,” said Fang, who is currently an Einstein Fellow at Stanford University. “Thus, we combine all of its signals, from low energy radio to X-ray, with new high-energy gamma ray observations, to find out what kind of beast SS 433 really is.”

Until now, instruments had not observed SS 433 emitting such highly energetic gamma rays. But HAWC is designed to be very sensitive to this extreme part of the light spectrum. The detector also has a wide field of view that looks at the entire overhead sky all of the time. The collaboration used these capabilities to resolve the microquasar’s structural features.

“SS 433 is an unusual star system and each year something new has come out about it,” said Segev BenZvi, another co-author of the study and an assistant professor of physics at the University of Rochester. “This new observation of high-energy gamma rays builds on almost 40 years of measurements of one of the weirdest objects in the Milky Way. Every measurement gives us a different piece of the puzzle, and we hope to use our knowledge to learn about the quasar family as a whole.”

For more information about the HAWC Observatory, see: https://www.hawc-observatory.org/