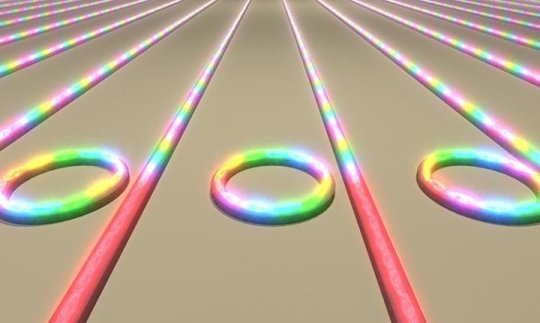 Optical frequency combs can enable ultrafast processes in physics, biology, and chemistry, as well as improve communication and navigation, medical testing, and security. The Nobel Prize in Physics 2005 was awarded to the developers of laser-based precision spectroscopy, including the optical frequency comb technique, and microresonator combs have become an intense focus of research over the past decade.

A major challenge has been how to make such comb sources smaller and more robust and portable. In the past 10 years, major advances have been made in the use of monolithic, chip-based microresonators to produce such combs. While the microresonators generating the frequency combs are tiny — smaller than a human hair — they have always relied on external lasers that are often much larger, expensive, and power-hungry.

Researchers at Columbia Engineering announced today in Nature that they have built a Kerr frequency comb generator that, for the first time, integrates the laser together with the microresonator, significantly shrinking the system’s size and power requirements. They designed the laser so that half of the laser cavity is based on a semiconductor waveguide section with high optical gain, while the other half is based on waveguides, made of silicon nitride, a very low-loss material. Their results showed that they no longer need to connect separate devices in the lab using fiber — they can now integrate it all on photonic chips that are compact and energy efficient.

The team knew that the lower the optical loss in the silicon nitride waveguides, the lower the laser power needed to generate a frequency comb. “Figuring out how to eliminate most of the loss in silicon nitride took years of work from many students in our group,” says Michal Lipson, Eugene Higgins Professor of Electrical Engineering, professor of applied physics, and co-leader of the team. “Last year we demonstrated that we could reproducibly achieve very transparent low-loss waveguides. This work was key to reducing the power needed to generate a frequency comb on-chip, which we show in this new paper.”

Microresonators are typically small, round disks or rings made of silicon, glass, or silicon nitride. Bending a waveguide into the shape of a ring creates an optical cavity in which light circulates many times, leading to a large buildup of power. If the ring is properly designed, a single-frequency pump laser input can generate an entire frequency comb in the ring. The Columbia Engineering team made another key innovation: in microresonators with extremely low loss like theirs, light circulates and builds up so much intensity that they could see a strong reflection coming back from the ring.

“We actually placed the microresonator directly at the edge of the laser cavity so that this reflection made the ring act just like one of the laser’s mirrors — the reflection helped to keep the laser perfectly aligned,” says Brian Stern, the study’s lead author who conducted the work as a doctoral student in Lipson’s group. “So, rather than using a standard external laser to pump the frequency comb in a separate microresonator, we now have the freedom to design the laser so that we can make the laser and resonator interact in new ways.”

All of the optics fit in a millimeter-scale area and the researchers say that their novel device is so efficient that even a common AAA battery can power it. “Its compact size and low power requirements open the door to developing portable frequency comb devices,” says Alexander Gaeta, Rickey Professor of Applied Physics and of Materials Science and team co-leader. “They could be used for ultra-precise optical clocks, for laser radar /LIDAR in autonomous cars, or for spectroscopy to sense biological or environmental markers. We are bringing frequency combs from table-top lab experiments closer to portable, or even wearable, devices.”

The researchers plan to apply such devices in various configurations for high precision measurements and sensing. In addition, they will extend these designs for operation in other wavelength ranges, such as the mid-infrared where sensing of chemical and biological agents is highly effective. In cooperation with Columbia Technology Ventures, the team has a provisional patent application and is exploring commercialization of this device.