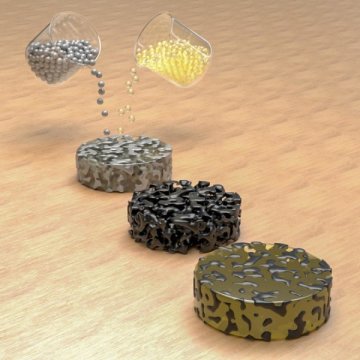 Epoxy combined with “ultrastiff” graphene foam invented in the Rice lab of chemist James Tour is substantially tougher than pure epoxy and far more conductive than other epoxy composites while retaining the material’s low density. It could improve upon epoxies in current use that weaken the material’s structure with the addition of conductive fillers.

The new material is detailed in the American Chemical Society journal ACS Nano.

By itself, epoxy is an insulator, and is commonly used in coatings, adhesives, electronics, industrial tooling and structural composites. Metal or carbon fillers are often added for applications where conductivity is desired, like electromagnetic shielding.

But there’s a trade-off: More filler brings better conductivity at the cost of weight and compressive strength, and the composite becomes harder to process.

The Rice solution replaces metal or carbon powders with a three-dimensional foam made of nanoscale sheets of graphene, the atom-thick form of carbon.

The Tour lab, in collaboration with Rice materials scientists Pulickel Ajayan, Rouzbeh Shahsavari and Jun Lou and Yan Zhao of Beihang University in Beijing, took their inspiration from projects to inject epoxy into 3D scaffolds including graphene aerogels, foams and skeletons from various processes.

The new scheme makes much stronger scaffolds from polyacrylonitrile (PAN), a powdered polymer resin they use as a source of carbon, mixed with nickel powder. In the four-step process, they cold-press the materials to make them dense, heat them in a furnace to turn the PAN into graphene, chemically treat the resulting material to remove the nickel and use a vacuum to pull the epoxy into the now-porous material.

“The graphene foam is a single piece of few-layer graphene,” Tour said. “Therefore, in reality, the entire foam is one large molecule. When the epoxy infiltrates the foam and then hardens, any bending in the epoxy in one place will stress the monolith at many other locations due to the embedded graphene scaffolding. This ultimately stiffens the entire structure.”

The puck-shaped composites with 32 percent foam were marginally denser, but had an electrical conductivity of about 14 Siemens (a measure of conductivity, or inverse ohms) per centimeter, according to the researchers. The foam did not add significant weight to the compound, but gave it seven times the compressive strength of pure epoxy.

The lab upped the ante by mixing multiwalled carbon nanotubes into the graphene foam. The nanotubes acted as reinforcement bars that bonded with the graphene and made the composite 1,732 percent stiffer than pure epoxy and nearly three times as conductive, at about 41 Siemens per centimeter, far greater than nearly all of the scaffold-based epoxy composites reported to date, according to the researchers.

Tour expects the process will scale for industry. “One just needs a furnace large enough to produce the ultimate part,” he said. “But that is done all the time to make large metal parts by cold-pressing and then heating them.”

He said the material could initially replace the carbon-composite resins used to pre-impregnate and reinforce fabric used in materials from aerospace structures to tennis rackets.