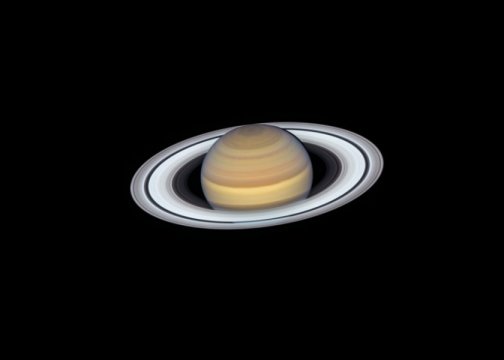 Saturn is so beautiful that astronomers cannot resist using the Hubble Space Telescope to take yearly snapshots of the ringed world when it is at its closest distance to Earth.

These images, however, are more than just beauty shots. They reveal a planet with a turbulent, dynamic atmosphere. This year’s Hubble offering, for example, shows that a large storm visible in the 2018 Hubble image in the north polar region has vanished. Smaller storms pop into view like popcorn kernels popping in a microwave oven before disappearing just as quickly. Even the planet’s banded structure reveals subtle changes in color.

But the latest image shows plenty that hasn’t changed. The mysterious six-sided pattern, called the “hexagon,” still exists on the north pole. Caused by a high-speed jet stream, the hexagon was first discovered in 1981 by NASA’s Voyager 1 spacecraft.

Saturn’s signature rings are still as stunning as ever. The image reveals that the ring system is tilted toward Earth, giving viewers a magnificent look at the bright, icy structure. Hubble resolves numerous ringlets and the fainter inner rings.

READ  Tech: What causes the sound of a dripping tap -- and how do you stop it? -- (Report)

This image reveals an unprecedented clarity only seen previously in snapshots taken by NASA spacecraft visiting the distant planet. Astronomers will continue their yearly monitoring of the planet to track shifting weather patterns and identify other changes. The second in the yearly series, this image is part of the Outer Planets Atmospheres Legacy (OPAL) project. OPAL is helping scientists understand the atmospheric dynamics and evolution of our solar system’s gas giant planets.